Overheard on the Block Island Ferry this past Sunday . . .

Boy, about 10, looking over the railing at sea foam as the ferry pulls out of Old Harbor, heading back to the Rhode Island coast: “Look, there’s barnacles in the water! Do I have barnacles?” 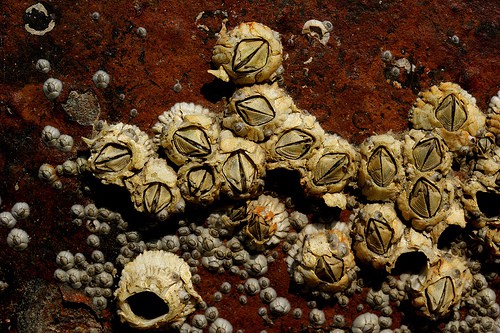 His older brother, maybe 11: “No, you don’t get barnacles unless you’re under the water for a long time, like maybe two weeks.”

Fortunately, the older brother is correct, and the boy has attracted no barnacles of his own. The ferry’s powerful engine hums as we pick up speed and cruise past the island’s cliff-like dunes, dull copper beneath overcast skies.

I lean back against the blue bench along the middle deck, watching the dunes and the North Lighthouse slip past, and contemplate barnacles, those tiny, cream-colored sea creatures that attach themselves to boulders and boats and whales in lacy patterns and feed on plankton within their sharp, crusty shells. No need to move anywhere once they find a home. They just latch on and draw sustenance from whatever drifts their way.

I have a few of my own that I’d like to shed, worries about my health, money, work, family transitions, our aging golden retriever, reactionary politics, the NSA, the Middle East, climate change.

But they’re tenacious, clinging to my subconscious, scraping me when I indulge them, cutting. No easy way to dislodge them and toss them back into the sea.

The ferry cruises now at full speed across open ocean, heading to the mainland. A small red tugboat pulls what appears to be a stranded white yacht. On the horizon, sailboats catch the evening breeze. I relax into the rhythm of the boat rising and falling over light waves. Concerns that have dogged me all day when I should have been enjoying myself magically evaporate into the moist sea air.

Whenever I find myself growing grim about the mouth; whenever it is a damp, drizzly November in my soul; whenever I find myself involuntarily pausing before coffin warehouses, and bringing up the rear of every funeral I meet; and especially whenever my hypos get such an upper hand of me, that it requires strong moral principle to prevent me from deliberately stepping into the street, and methodically knocking people’s hats off—then I account it high time to get to the sea as soon as I can.

A flock of cormorants fly in formation, skimming the water. The setting sun burnishes blue-black waves to a salmon-pink patina.

From saltwater we came. Perhaps that is why the sea is so soothing. Sail on, sail on, swift enough to evade the barnacle’s pincers, slow enough to cast angst adrift. At least ’til landfall.