Hide Search
You are here: Home / Body / Fly Away

When we moved into our home 16 years ago, one of Al’s brothers gave us a squirrel-proof bird feeder as a house warming gift. Last month, we finally hung it on the Norway Maple in the back yard.

Our delay was due, in large part, to Ginger. A frustrated huntress her whole life (she was, after all, a Golden Retriever), she would have had conniption fits with so many birds in the back yard. Now, with her gone, it’s time to give wildlife its due. 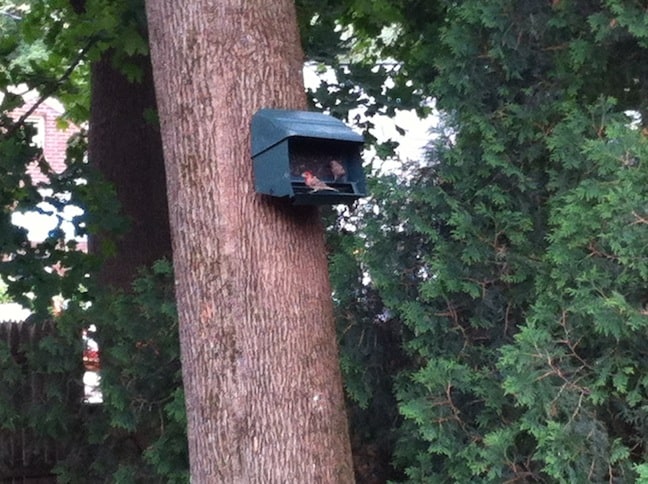 And so, my morning’s entertainment, as I eat breakfast, is to watch the birds at the feeder. This is, without question, one of the best antidotes to stress that I have ever discovered. For me—not for the birds.

In fact, our backyard feeder has become quite the point of contention. A blight of house sparrows (yes, “blight” is the actual term for a group of them, or, if you prefer, a “humiliation”) has taken over the feeder. I had no idea they were so aggressive. They have batted away chickadees and house finches and scared off nuthatches. No cardinals have visited the feeder yet, despite the fact that we’ve filled it with black oil sunflower seeds (which house sparrows supposedly don’t like—not true). Morning doves, being ground feeders like their pigeon cousins, clean up what drops below, along with a chipmunk.

I can vouch for the manufacturer’s promise that the feeder is squirrel-proof. One particularly inquisitive gray squirrel has tried numerous ways to get at the seeds (I know there’s something in there!) by climbing all around it, and even going so far as to grab and pull down the springy perch. But so far, it hasn’t found a way to get the goods (though I must say, as a former psych major, the squirrel’s attempts are a fascinating study in learning styles).

The feeder’s hopper is full. When we return from our vacation at month’s end, I wonder how much will be left and if the sparrows will still dominate. Maybe the house finch, with its beautiful scarlet head feathers, will have finally told them off. Either that, or we’ll have a lot of house sparrows nesting in our eaves.

Meanwhile, as I make final preparations for our European travels, checking off items on to-do lists that seem to propagate over night, trying to plan for every possible health-related contingency and knowing that I will just have to deal with whatever happens, scrambling to finish off work for clients and my sewing and last-minute purchasing, I will continue to watch the birds and cheer for the house finch, which grabbed a few seeds while the sparrows weren’t looking.

If all goes according to plan, as you read this, we will be in Berlin, the first of seven cities on our complicated itinerary that takes us from Germany to France to Belgium to England to Ireland. All in the name of research for my novel and visits with friends and, yes, adventure.

Time for a break from blogging. Whatever your own summer plans, I wish you well. See you in a few weeks.