Hide Search
You are here: Home / Body / Gift of a Lifetime

Twenty-eight years ago this past weekend, on another mild December Sunday, about an hour before Al and I were to exchange our marriage vows, I arrived at our synagogue carrying the white satin-and-lace wedding gown I’d sewn myself. The sun was streaming through the lobby windows at the opposite end of the hallway. And there stood Al, so handsome in his white cutaway tuxedo. We startled as we glimpsed each other, then laughed. I ducked into the Bride’s Room to get ready and hide until the ceremony. 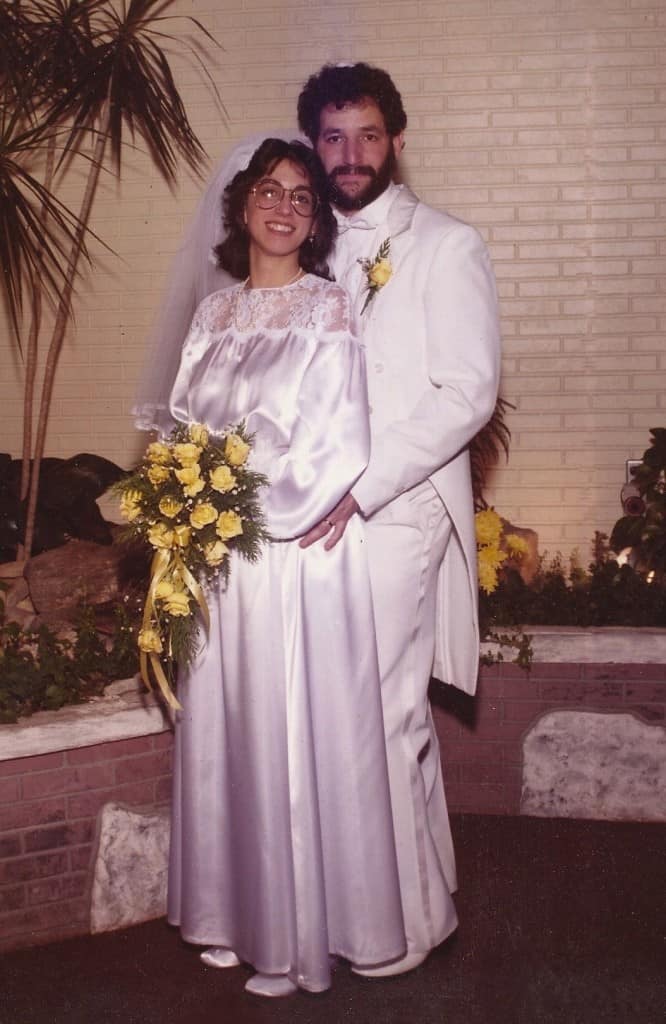 We still joke about that moment, all the excitement and anticipation and hopes for a good life together packed into an instant of recognition. It was my second marriage, his first. All I wanted was for everything to work out right, this time.

We’d dated for just nine months. But our introduction was through our rabbi, who had known Al since childhood. Sterling credentials. Still, there was no way to know, as we stole those glances on our wedding day, whom I was really marrying.

I began to understand within a few weeks after we returned from our Cape Cod honeymoon. Before our wedding, when we’d had blood tests for our marriage license, I’d told our internist that I’d been experiencing fleeting joint pain, and my hands had been swelling recently. The wedding band we’d ordered was too tight when it arrived, and the jeweler had to stretch the gold to fit my ring finger. Our doctor ordered an ANA blood test to rule out any complications and referred me to a rheumatologist for an evaluation in January.

Back from the Cape, I was happily setting up our apartment and not thinking much about all of this, even considered canceling the appointment as a waste of time. But, being ever-diligent, I went, anyway.

The appointment turned my world upside down. My rheumatologist explained that my ANA had come back positive, a sign of some form of autoimmune disease. He thought it was one of three possibilities: rheumatoid arthritis, lupus or scleroderma. We discussed my long history of cold hands, sun-sensitive skin since my early twenties, migrating arthralgia for the past year or so, struggles with fatigue. We examined my cuticles under a magnifying loop, and he pointed out the wriggled, abnormal capillaries. We scheduled more tests and follow-up appointments.

I came home and sat on the love seat in our small living room, barely able to speak. Al sat with me. We looked at each other. I felt like damaged goods. I was terrified. Of the possible diseases, I only knew that lupus had killed my literary heroine, Flannery O’Connor, at 39. I was 30. I’d never heard of scleroderma. Neither had Al.

Much later, he told me his mother had warned him when we got engaged that I looked thin and frail. Even though she liked me, she was concerned about what kind of a wife and mother I would make.

Whether or not he had second thoughts when I came home from the rheumatologist, however, he never expressed them. Instead, he put his arm around me, and we sat there as I cried about what might happen and why this had to happen now, just as everything in my life seemed to be finally working out.

In the months that followed, we struggled to learn how to cope and talk about my health. My body kept doing strange things without warning, like suddenly flaring with a bout of pleurisy when I was serving Friday night supper to Al and his mother, or creating so much pain in my wrists that I couldn’t lift a pan off the stove. I was often tired and had to pause from my freelance writing to nap in the afternoon. I couldn’t play tennis anymore. I got exhausted from hiking or camping. I couldn’t finger my violin, which Al had had refurbished as an engagement present. There were times when he seemed distant, and I didn’t know how to reach him.

But this turned out to be just a prelude. That fall, Al’s mother was hospitalized with the first of two strokes. Running back and forth from work to see her in the hospital several times each day, working a second job as synagogue youth leader, Al contracted mono. On an icy night, Thanksgiving weekend, he began rasping in his sleep.

I found him, eyes open, pupils dilated, drenched in sweat. On instinct, I slapped his face to make him come to. He started breathing normally again, and we were able to talk. Pumping adrenaline, on auto-pilot, I called our medical service and was told to bring him to the ER. For some stupid reason, I thought I could do this myself, but when I tried to get him out of bed, he collapsed on top of me. So I finally called the ambulance.

Over the next few days, we learned that Al’s spleen had ruptured and he was being held together by a blood clot. He came home from the hospital, sans spleen, with a long scar down his chest that was still healing, the day before our first anniversary.

For seven more years, we watched over Al’s mother, helping her through a second stroke, at-home care and the transition to a nursing home. We lived through many more family medical emergencies—for Al’s mom, my parents, our two daughters, Al himself. I became an expert at managing the details of everyone’s medical history and medications. My scleroderma progressed, slowly but relentlessly.

With time, some counseling, and a lot of practice, we learned how to talk about all of this, how to cope, and how to thrive in our marriage. Even as my disease has made itself at home as the unwelcome third partner in our relationship, Al has never failed to know the right thing to do or say about my own health challenges. He has patiently supported me when I needed him, but never babied me or made me feel like an invalid. He has always expected me to be just myself, my whole self, not this supposedly frail woman with scleroderma. We both understand, all these years later, I’m a lot tougher than that. And a lot more.

No way to know, as I glimpsed my husband-to-be in the sunlight on our wedding day. No way to know. But what a blessing. And what a gift.