Hide Search
You are here: Home / Body / How Not to Spend a Snowstorm 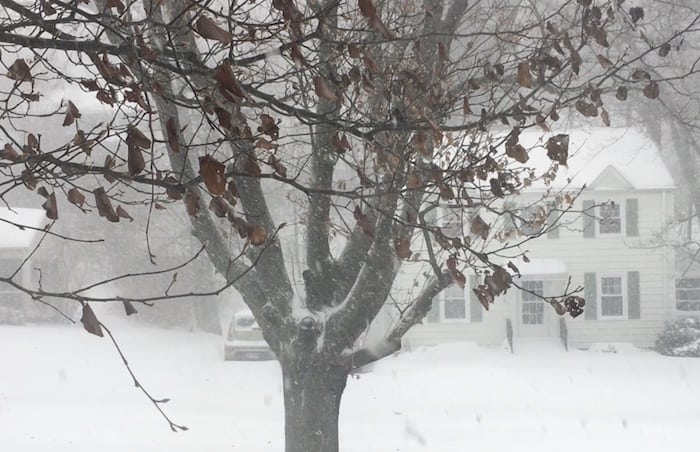 We are emerging from a deep freeze. Over the weekend, temperatures here in Central Massachusetts dipped to 1°F—in the daytime. By comparison, teens and twenties seem, if not balmy, at least bearable.

This was on top of a Nor’easter that dumped 17 inches of snow on our fair city, an all-day event last Thursday that I was grateful to avoid while hunkered down at home. But contrary to how I would have preferred to spend a snowstorm—enjoying comfort food while watching the snow blow at a 45 degree angle outside—I had the distinct displeasure of having to do a day-long liquid fast, in preparation for my 10-year-plus colonoscopy screening the following morning.

I had been postponing this distasteful exam for at least six months. The original was scheduled for the summer, but as my hands deteriorated, I decided to spare myself additional discomfort and put it off to the fall. Then, when I began the HBO therapy, I had another excuse to put it off until January.

When the storm predictions looked more and more threatening, I was hoping the weather might force another extension. What if it dragged on until Friday? What if our road wasn’t plowed? No such luck. The snow began to taper off around 5:00 p.m., just as I was starting the noxious lemon flavored drink to purge my gut.

According to the instructions, you’re supposed to drink two liters of the vile stuff the evening prior and the remaining two liters the next morning, with three hours to spare before the procedure. Now, I don’t normally drink that much fluid in a day, let alone in a matter of hours, let alone something that sickly sweet with such an intentionally unpleasant outcome.

But, drink, I did. Fortunately, I had a good book to read as a distraction—The Accursed, by Joyce Carole Oates—which, I realized later, was an appropriate title for how I was feeling in the moment.

I woke up around 4:00 a.m., gave up on sleep because my hands were bothering me (since I couldn’t take Ibuprofen with food), changed my dressings and set to work on the remaining two liters. I got through about half of it when I decided I was done. There was nothing left to come out, and I couldn’t stand any more.

As it turned out, that was the right call, because when the admitting nurse Friday morning asked how much I’d drank, and I told her three of the four liters, she simply wrote it down and said “fine.”

The outpatient center where I had my procedure does nothing but endoscopies of one sort or another. I asked how many colonoscopies they do in a day, and the nurse said about 50. Wow. All the other patients there looked about as wiped out as I felt, waiting to get it over with. I signed a bunch of forms, including one fascinating list that included alternative screening tests, such as X-rays. Did anyone give me the information in advance that this was an option? No. Did I even think to ask? No. It may not be as thorough a screening, but I would have at least liked to have had the discussion with my primary.

Then there was the question of IVs. I knew they would give me a sedative for the procedure, which was fine by me. But after the nurse inserted the hep-lock in my arm and flushed it with saline, she simply said they would give me “some medicine” during the procedure. I was not about to leave it at that. “What kind?” I asked. Only then did she give me specifics, which were also listed on another form I then had to sign, though I seriously wonder if they expected me to read it before signing (which I did). Fortunately, I had experience with both meds. Even as she’d reviewed my numerous allergies in advance, I would have preferred specifics up front.

Into the procedure room I was wheeled. The team was friendly and professional. I chatted with the doctor’s assistant about our respective experiences driving in snow storms. I learned that they had actually stayed open the morning of the storm for those brave enough to go through with their tests, despite the snow.

Soon I was half-asleep, conscious of something going on “down there,” but more in a state of wonderment. As I dozed in recovery, I made note of all the beeping and dinging machines nearby. Apple juice and graham crackers never tasted so good. Best of all was the immediate report from the doctor that I passed with flying colors. No signs, either, of sclerosis in my colon, thank goodness.

It was a relief to see Al in the waiting room, ready to take me home. I made myself a nice, late breakfast of scrambled eggs and toast, then lay down for a nap. The next extremely cold day, I was very glad to stay home.

Ten more years until I have to do this again. I hope, by then, some brilliant person will have devised an easier, comfortable, quicker way to do this exam. Maybe we’ll just be able to scan our own colons and transmit a hologram for inspection. Wouldn’t that be nice.