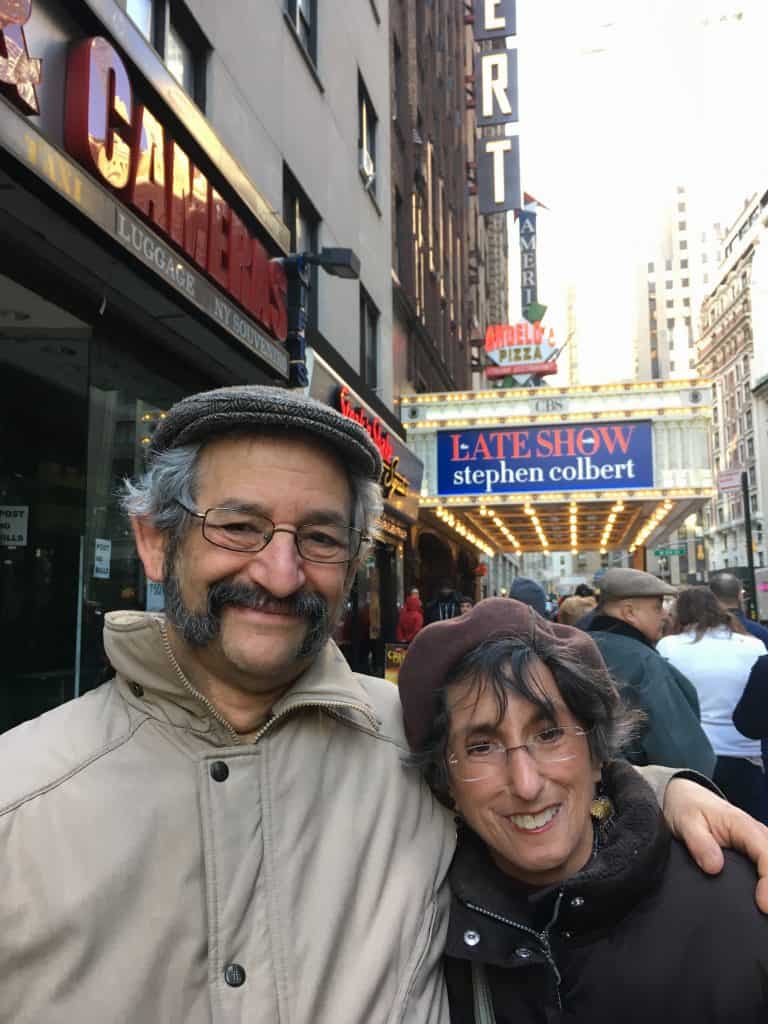 I stay up way too late most nights watching late night comedians. Since we live on the East Coast, this means I’m getting to bed around midnight. My evening routine is prolonged by tending to all the bandages on my fingers—up to six ulcers at present, plus one on my left ankle—so my excuse is that the shows keep me company while I’m taking care of my hands. But in all honesty, I rely on satire to keep my sanity.

My favorite is Stephen Colbert. Al’s, too. So when Al suggested that we mark our anniversary this year by a trip to NYC to see a live taping of The Late Show, I readily agreed. We were married in December 32 years ago, but due to scheduling conflicts, our first opportunity to go was last week.

And go, we did. We decided to make a mini vacation of it, booking a four star hotel on Park Avenue at a January discount, scoring half-price tickets to a Sunday afternoon off-Broadway show, enjoying great food and wonderful art museums on Monday and Tuesday. But the highlight of the trip was our pilgrimage to the Ed Sullivan Theatre for Colbert on Monday afternoon.

Now, as children of the ’60s, it was exciting enough to be at the very spot where the Beatles made their American debut. The theatre features architectural filagree that gives it a period flare. It’s located on Broadway between West 53rd and 54th Streets–the latter also designated as Señor Wences Way, a throwback to that wonderful, corny feature act on the Ed Sullivan Show that we loved as kids.

But it was also fun just to be with other Colbert fans as we waited outside, joking and speculating about the program as we stamped our feet and huddled against the cold. The priority ticket line formed at 3:00 p.m. We arrived shortly after and quickly made our way through the check-in, staffed by friendly red-jacketed twenty-somethings armed with iPads and headphones, who made occasional announcements about what to do and where to go. A nice couple offered to take our picture in front of the marquee, and we returned the favor.

By 3:45, rehearsal was over and we were finally allowed to enter the warm theatre lobby. More waiting and waiting in a long, snaking line beneath large TV monitors playing excerpts from previous shows, though the sound was muted. From time to time, one of the staff would fill us in on next steps and rules: turn off all cell phones, no food allowed in the studio theatre, and—around 4:30—now’s the time to use the bathroom, because once you’re seated, there are no bathroom breaks.

Wait, what? I’d figured that, if I had to go, I’d be able to do so during a commercial. But, no, only if it was an emergency—and no guarantee you could be reseated. Now, this was potentially a major issue for me. I can no longer go long stretches without a trip to the bathroom. My bladder just doesn’t empty efficiently. So I joined a line of other women, waiting for a stall in the Ladies’ Room, and hoped I could squeeze out the last drop. Fortunately, we’d eaten lunch about two hours earlier, and I hadn’t had much to drink.

Back in line, I distracted myself by chatting with some of our neighbors, flexing my ankles and feeling grateful that I was wearing compression knee socks, so that my feet wouldn’t swell from all the standing around. Finally, shortly after 5:00, it was time to be seated. The red jackets were very experienced at crowd control, and we efficiently filed into the main floor. Lo and behold, the center section was full, so Al and I found ourselves guided toward the third row of the right-hand section, directly in front of Jon Batiste’s Steinway concert grand piano. Al was in heaven.

Here we were, with a great view of the Late Show set, so familiar from our TV at home. We gawked and chatted with our seat mates (mine was a Lutheran pastor from Saskatchewan, here with friends for her first visit to NYC), listened to more instructions about our role as audience (enthusiasm and energy are essential for the performers as well as the 2.5 million folks watching later tonight), practiced standing and cheering, warmed up to the warm-up comic, clapped and bopped to the outstanding jazz of Jon Batiste and Stay Human, and then, finally, screamed our heads off, just like those Beatles fans fifty years ago, when Stephen Colbert ran out on stage to greet us.

He was genuinely warm in person, very down-to-earth, as he fielded a few questions from the audience with his quick, dry wit. Then it was time for the taping to begin. We could watch the cold open on the video monitors, then Colbert ran out on stage again, this time as part of the show. The boom camera swept the audience, and we were off to the races.

Time zipped by. There was a surreal quality to the experience, watching Colbert perform for the four cameras that surrounded him in his opening monologue, even as he fed off our energy. There was a pause for him to switch from his suit jacket to a Dad sweater for a skit with guest Leslie Mann, another pause because one of the lights wasn’t working properly, casting a shadow on the couch where they were to sit. “The Russians must have hacked our set,” he quipped.

The band played on during commercial breaks (how I wish that were the case when you watch on television–they are such amazing talents). Lewis Black and Dan Levy rounded out the program. We stood and cheered on cue (when the stage manager waved his rolled-up script in the air). Colbert’s wife made a surprise appearance to roars of approval.

And then it was over. I’d been so absorbed, I’d forgotten all about any bathroom jitters. Al and I looked at each other. We didn’t want it to end. Despite the cold, we walked all the way from Times Square back to a little Italian restaurant near our hotel, where we enjoyed a fine dinner and live piano music. Later, we watched the show again in our hotel room, to see how it was edited and, of course, to see if we made it onto the tape. And there we stood, cheering in the crowd after one of the early commercial breaks! I finished bandaging my fingers, and we went soundly to sleep.

All in all, it was a wonderful anniversary celebration—a great break, a much-needed chance to recharge, a gift of resilience. And, oh, did I mention? The Colbert tickets were free.