Hide Search
You are here: Home / Body / In the Belly of the Beast

There’s no such thing as a non-invasive test. Some are just more invasive than others.

Last week I found myself inside a clanging, banging, buzzing, bleeping MRI machine, undergoing a 25-minute diagnostic that was probably unnecessary, one of those just-in-case procedures you occasionally have to endure because one of your specialists needs to validate a hypothesis and define a baseline. 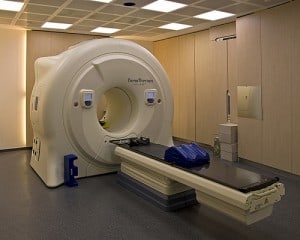 I’d had an MRI once before, at Boston Medical, lying on my back with a pair of headphones, listening to Ray Charles. The procedure was longer, but the music was good enough to distract me from the machine’s clanging, so the time passed relatively quickly.

Not so last week at an outpatient facility near home. First of all, the position was uncomfortable. I had to lie on my stomach, head in a padded masseuse-like cushion, arms forward, another pad pressed against my abdomen, ankles draped over some kind of wedge, like a swimmer frozen in a dead man’s float. Secondly, the music was lousy—a choice between two stations I dislike (pop rock versus easy listening) on headphones with poor reception. So equipped, unable to see around me, with an IV in my arm and a rubber squeeze ball to grasp in case of emergency, I slid backwards into the MRI’s gullet.

Buzzing soon commenced. Through the headphones, I could hear the tech’s voice alerting me that this first scan would take five minutes. BEEEEP. BANG-BANG-BANG-BANG. I could barely hear the music because of all the static in the headphones, let alone all that banging and clanging, and the song wasn’t anything I really wanted to listen to in the first place, but I hung onto the notes so as not to start feeling claustrophobic.

CLANG-CLANG-CLANG-CLANG. The music ended and the announcer started jabbering, followed by a lot of commercials that sounded like gibberish. I tried to figure out how many more of the five minutes were left by counting the number of ads. Finally, a moment of silence inside the machine.

BUZZ-BUZZ-BUZZ-BUZZ-BUZZ. Another series of scans. I did my best to keep breathing without moving anything I wasn’t supposed to move. This was not easy, especially with the pad compressing my diaphragm. I practiced Pilates breathing, expanding the sides of my rib cage. I wondered if either of the techs had ever gone through this procedure. I decided this should be part of every MRI tech’s training.

The tech’s voice in my headphones informed me that she was now going to insert the contrast dye through the IV. I might feel a cool tingling, but if I took a few deep breaths, the sensation would pass. BEEEEEEEEEEP. BANG-BANG-BANG-BANG. Somewhere in the background, I could hear Billy Joel’s “Just the Way You Are.”

I tried to monitor the progression of the slightly cool dye through my veins. I have an allergy to certain contrast dyes, but I had been assured this was very safe. BUZZ-BUZZ-BUZZ-BUZZ-BUZZ. So far, so good. I tried to focus on the barely audible lyrics as the machine moved through a series of five scans, grateful for the brief silences between each cacophonous set.

All of a sudden, I felt flushed and unable to get a full breath. I tried to calm myself, but my breathing was too shallow. I squeezed the rubber ball several times. The tech and her assistant were both in my headphones, slightly annoyed. This was the final scan, just two minutes left, what was wrong? “I feel like I’m going to faint,” I said, twice. The machine stopped. A door opened. I moved forward. Someone took my hand, probably the assistant. The tech reassured me it couldn’t be a reaction to the dye, I’d had it seven minutes ago and been fine, it was like aspirin, it would just pass through my system. The weird sensation lifted, and I was able to breathe fully again. Back into the belly of the monster.

At last, blessed peace. The awful radio music ended, too. I could feel myself moving out into the open air of the room. As the tech removed the IV catheter, she noticed my bandaged fingers.

“No, I have scleroderma.”

“Oh.” Silence. She had no clue what I was talking about.

I sat up, slowly, feeling groggy. The assistant brought me a bottle of apple juice. I took a few sips and wondered aloud why the machine was so noisy. The tech explained that it had to do with the various levels of magnetic resonance. Then she added, “A man made it. That’s why it doesn’t work right.”

I was still a little woozy getting dressed, but relieved to slip my wedding ring back in place. Fresh air felt wonderful. I took another sip of juice as I relaxed into my car seat, Symphony Hall playing on my satellite radio, then realized I’d forgotten to ask when the test results would be available. But I didn’t really care. I’d hear soon enough.

Down the street was a car wash. No one was in line. As my Prius drifted gently into the dark, automated cavern, I lay back, listening to Brahms, drinking my juice, and watched the clear, fine spray wash the last traces of late winter’s grime from my windshield.