Years ago at an amusement park with my parents and sister, I remember standing in the arcade, watching a guy in a car-like booth trying to steer through imaginary traffic displayed on a video screen. As the timer ticked, images of people and cars jumped into view, and the guy stomped on the brakes and spun the wheel round and back, round and back, to avoid “hitting” them. The little crowd that had gathered to watch had a good laugh. I think he probably ran over quite a few pedestrians before the game was over. 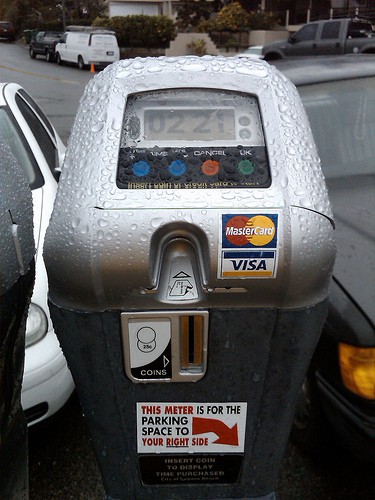 I often recall that scene when I’m driving in downtown Boston. You never know when someone’s going to run into traffic, pass you on either side riding a bicycle, double-park in front of you, speed around you in a taxi or pull some other stunt in the race to get wherever they’re going.

But the biggest prize in negotiating Boston traffic, aside from arriving at your destination on time without an accident, is finding on-street parking.

Lately, when I’ve had appointments downtown, it seems that the major parking garages are only accepting monthly permit customers, and the Boston Commons garage, while usually available, is a often a longer walk to my destination. Plus, even with a coupon, the garages are pricey. So if I see a site, I grab it.

This happened last week, during Thursday’s Nor’easter. By a miracle, I saw a great space on Boylston, only a couple of blocks from my appointment. But there was one problem: The city is switching over to those new meters that take coins, cash or plastic.

Now, I like the idea of not having to carry exact change in quarters. You need a lot of quarters to feed the meter. But I have an extremely difficult time inserting and removing my debit card in these new machines.

This one took bills, too. Great, I thought. Then I tried inserting a dollar. The wind was whipping the bill, and, of course, this dollar had a little bent corner, so I was standing there in the cold rain, trying to straighten it out and insert it into the slot. But the meter wouldn’t accept it. I tried reversing the bill. No luck. Each time, the wind nearly ripped the bill from my hand, and my fingers were getting numb.

No choice but to try the debit card. Here’s the issue: For some reason, the way these machines are designed, the slot is very deep and tight, and only a narrow edge of your card protrudes. So it’s very hard for me to grip the edge, because my fingertips are resorbed and sore from ulcers. It’s even more challenging when it’s cold out, since I have to take off my gloves to use the machine and my Raynaud’s kicks in. To compound the problem, for some reason, you have to insert the card and remove it quickly for the machine to read it. I find this next to impossible.

The last time I confronted one of these machines, in a Cambridge parking lot, I had to ask another person who was waiting to use it if she could insert and remove my card for me. This took a leap of faith, since it was my debit card. But fortunately, she was honest and helpful, and I was able to make the transaction.

This time, however, people were hustling down the sidewalk, focused on getting out of the wind and rain. There was a woman parked in a car right next to the payment machine, but I didn’t want to alarm her by knocking on her window. Anyway, I felt really stupid not being able to use the damn thing.

So I just kept trying. I inserted my debit card and tried to pull it out. Bad card read. I turned my hand sideways to try to get better leverage removing it. Bad card read. I tried using my right thumb and left forefinger to grab it. Bad card read. Finally, somehow, on about the fifth or sixth try, I managed to insert it and pull it out in time. This gave me the great privilege of paying $2.25 for nearly two hours on the street instead of at least $16.00 in a garage.

I removed my receipt and proudly placed it on the dashboard of my Prius. One of life’s little victories. But if someone out there is interested in designing a better, accessible parking meter that can be used by people whose hands don’t work, I’d be glad to consult.