Hide Search
You are here: Home / Body / Of Traffic Cones and Lobster Traps

After about a foot of snow accumulated across Massachusetts last week, Boston streets were a mess. One guy in Southie clocked an older neighbor after they got into an argument over a parking space. It seems the older guy had paid someone to shovel it out, and then, later that day, the younger 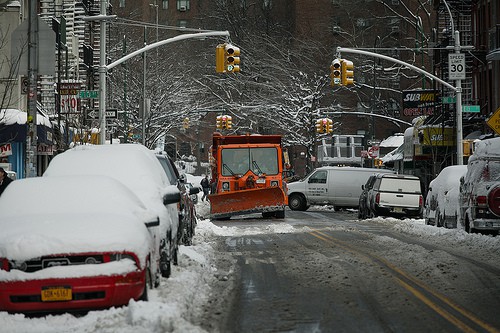 So much for civility. (Okay, kids, let’s remember to keep our hands to ourselves and use words to express our feelings.)

To warn off interlopers, there’s a venerated tradition in these parts of marking your shoveled parking space with traffic cones, old chairs, garbage cans or even lobster traps. Technically, this is only legal in Boston for 48 hours after a snow emergency (not the case last week).

From police reports, it’s unclear whether the older guy staked his space, regardless of parking regulations. Of course, if the younger guy had had any common sense or a drop of consideration, he would have known better than to park in a neatly cleared spot in front of his older neighbor’s home. There were undoubtedly better ways to resolve the dispute. On the other hand, it was a open parking space on a public street.

Which is why I’m intrigued by this story and have taken you on this long digression to make my point—boundaries in relationships are often murky, unless we strive to be clear about our personal limits, intentions and expectations.

Finding an appropriate way to do that without resorting to blows, abusive language or other offensive behavior is an essential life skill. Especially for those of us managing a chronic disease, particularly during the often stressful holiday season, setting clear boundaries to maintain and protect our health is crucial for well-being.

I have gotten better at this as I’ve lived for decades with scleroderma. I try not to yell or scream or manipulate others to get their sympathy when I’m feeling crummy or scared. I strive to set realistic limits and make my needs clear.

To wit, I only attend holiday gatherings that I really want to attend. I have learned to decline requests, politely but assertively, for social commitments that would drain my energy. I am (slowly) learning to ask for help with cooking and scaling down overly elaborate menus that I no longer can prepare (a reverse setting of boundaries with my ego, which still pushes me to be Superwoman). I avoid malls as the holidays approach and do all my gift-buying online. Whatever the time of year, I am coming to accept that I need to set limits with how much I can realistically accomplish in a day or a week in order to maintain my health—physical, mental, emotional and spiritual.

None of this is easy. I still sometimes resent having to set these boundaries when I’d rather be able to do more. But it is what it is. And there are advantages to setting out those virtual traffic cones and lobster traps, reminding myself and clarifying for others that I need to do less, to preserve my health and free up mental and emotional space to appreciate what’s right in front of me.

As I write, it’s drizzling outside my office window. Temperatures hover just above freezing before more cold air blasts through Massachusetts later this week. Not much of a white Christmas for celebrants. But at least there should be plenty of street parking.

Whatever your holiday practice, I hope your festivities are filled with joy, health, well-mannered family gatherings and clear communications about what you’re up for and where you need to draw your own boundaries. Best wishes to all, and be well.