Hide Search
You are here: Home / Body / Stuff and Nonsense

The older I get, the less stuff I want to own. Al and I have been married for 30 years, and we’ve lived in our current home for 16. When we moved here, we brought a lot of boxes with us that we have yet to unpack. Since then, we’ve acquired more stuff. When you have the space, you fill it. 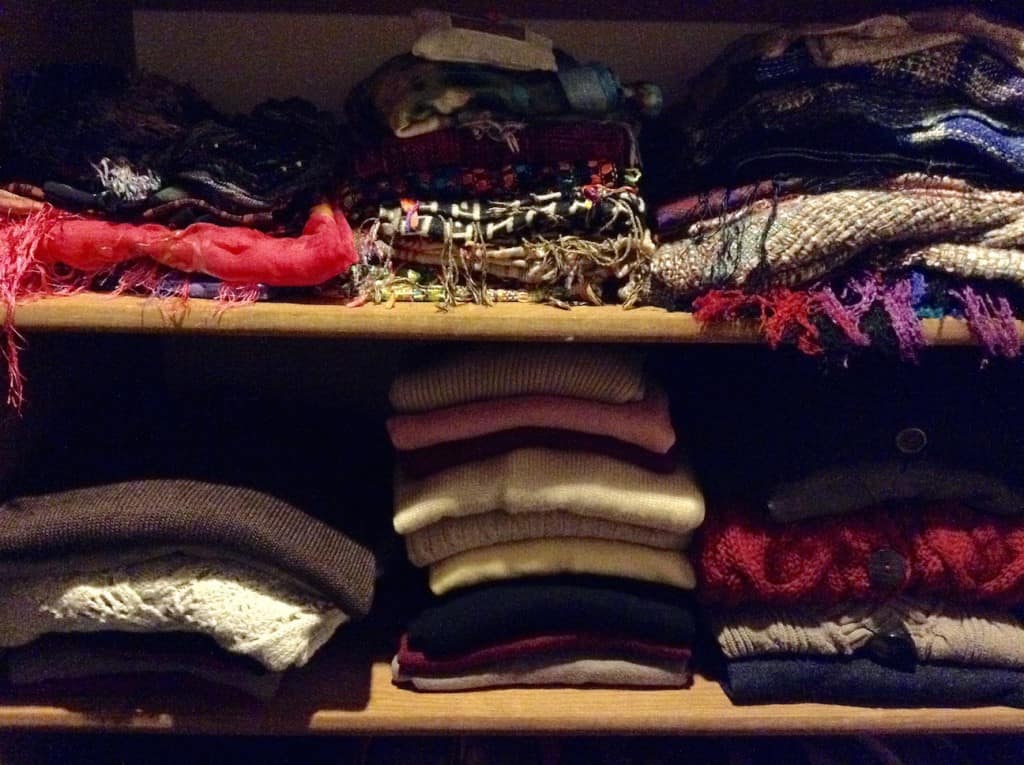 But a lot of that stuff is no longer needed, no longer functional or just plain in the way, collecting dust. The stuff in good condition that’s outlived its usefulness for us could be beneficial for someone else. And whatever can’t be repurposed or recycled just needs to be tossed.

So, fueled by our recent bedbug scare—a false alarm, thank goodness, but enough of a scare to make me realize it’s high time to declutter—Al and I devoted a day-and-a-half over Labor Day weekend to getting rid of stuff. We’re far from finished, but we made a good start.

My first goal was to purge my wardrobe. I targeted anything that no longer fits (time to stop deluding myself that I will someday be able to wear clothes from when I was 10 pounds thinner), that I haven’t worn in years or that I really don’t like but have held onto for sentimental reasons. I not only went through my closet, but also every drawer in my bureau and nightstand.

And I found a lot of stuff to give away: mom jeans, sweatshirts and T’s, a couple of favorite jackets that I’ve tired of, shoes that I’ve loved but can no longer wear because my feet are so sensitive, hats that once looked good on me but don’t now because my face has thinned with age and scleroderma. I parted with some scarves that had been my mother’s, which I’ve never seriously considered wearing, a good overcoat that dwarfs me, silk blouses I haven’t touched in years. I filled ten bags.

At the same time, I also found some clothes that I was happy to rediscover: some silk liners that will keep me warm this winter and my good dance sneakers, which I thought I had lost somehow. Now that I’ve been walking more and building up my endurance, I’m planning to give Zoomba another try, with the right shoes.

We also tackled some of the clutter in our basement. Al had the brilliant idea of bringing a big box of old looseleaf binders to a neighborhood youth center, where kids study for their high school equivalency diplomas. I went through the very stuffed top drawer (out of five) in my old filing cabinet and reduced the contents to about two inches of papers that I want to keep. (No, I really don’t need to save every single student paper I graded during my years as an adjunct writing instructor at Clark University in the 1980s.)

After all that sifting, sorting, tossing and bagging, we brought a carload over to Goodwill, including my clothes, some of Al’s, bags of wire dry-cleaner hangers, old purses and knapsacks, and other miscellaneous stuff. Al set out bags and boxes for recycling on the curb. It was all gone the next day.

There is still a lot to do. It’s a project that will take us well into the colder days of fall. But it feels so good to be down to what I really enjoy owning, rather than holding onto stuff just out of habit, laziness or misplaced sentiment, that I’m inspired to keep at it. It’s true. Less is more