Winter’s grip is at long last loosening. The icy ruts on our street mostly melted as temperatures rose into the 40s on Monday. The sun shone all day. Snow drifts are slowly, slowly shrinking. Buds are visible on the Callery pear in our front yard. 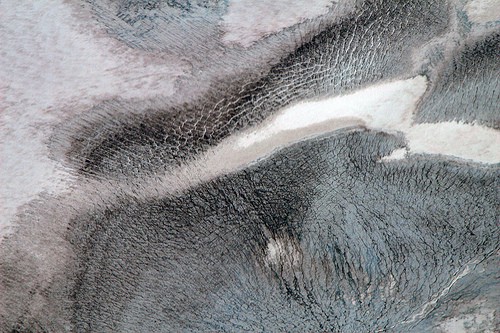 And somewhere under all that snow, I’m sure there are crocuses waiting for the sun to warm the frozen earth just enough for their tender leaves to push up and free.

Hard as it is for my internal clock to adjust to that first Sunday when we jump forward to Daylight Savings Time, it’s a delight to have the days feel longer again (even as I know it’s just an artificial shift in how we perceive when the day begins and ends).

March can be a deceptive month here in New England, promising spring and then dashing hopes with a late snow storm. But I’m feeling optimistic. According to the weather reports, the Jet Stream has finally moved farther north, which means we’re in for an easier, sunnier spell.

We’re certainly due after all that record-breaking snow and cold. My hands have taken a beating this winter. I’m finally weaning myself off a long round of antibiotics to clear up two infected ulcers, and I have five fingers swaddled in bandages as intransigent ulcers gradually heal. Spring can actually be my toughest season, though, so I’m hoping these will continue to improve.

Even still, there’s just something about seeing the promise of new leaves on the trees and watching water bubbles slide beneath the icy crusts along the street that I find reassuring. No matter how bitter the winter we’ve endured, the snow will melt, the temperatures will warm and the world will turn green once again.

I’m looking forward to wearing something other than the same sweaters, in varying combinations, and foregoing multiple layers—leg warmers, wrist warmers, two or three tops, wool pants, neck scarf, down coat, outer scarf, wool hat, insulated gloves, boots (have I forgotten anything?)—every time I go out the door. As it is, two of my good cashmere v-necks, which I’ve had for years, finally wore out with holes at the elbows. Maybe I’ll figure out a way to shorten the sleeves.

Most of all, I’m looking forward to walking outside with my coat open and a warm breeze on my neck and the sun warming my face.

The sun is shining, the snowplows are revving and Al is raking two feet of snow off our kitchen roof as I write. Twenty-four hours after Nemo blasted through New England, our street is a canyon of bright white snowpack amidst four-foot walls of plowed drift. Evergreens bow, weighted by mounds of melting snow, while barren hardwoods stand tall and unbroken, spared accumulation of Nemo’s fine, cold powder. 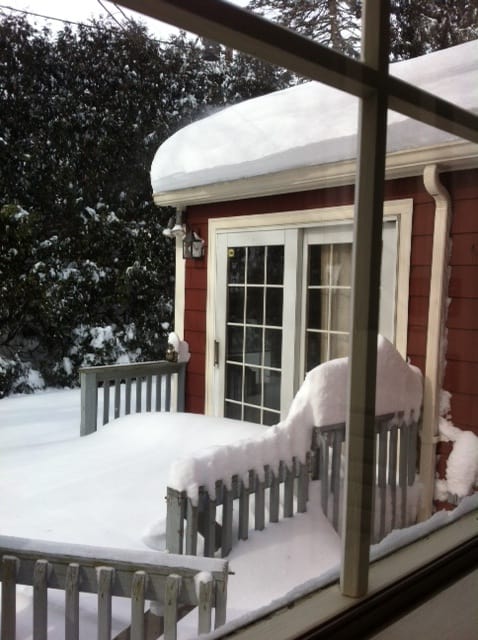 We went to bed Friday night listening to the wind howling overhead. The snow was blowing sideways near midnight. I watched it from our bedroom window, swirling and streaming in the streetlamp’s golden glow—reassurance that the power was still on.

Around five I awoke, unable to go back to sleep. Overnight, true to predictions, the snow had piled more than two feet high. Al’s car, parked in the drive, was half-buried. Only the  yellow cap of the fire hydrant at the front of our lawn was visible. The wind drove snow at a 45 degree angle. Flakes swirled and danced like millions of down feathers in a colossal pillow fight. And still, the power was on.

Once again, we got lucky. Through Tropical Storm Irene, through the 2011 Halloween Surprise, through Super Storm Sandy, through severe ice storms of recent years, and now through Nemo, we’ve had light, heat and hot water. I’m almost afraid to state it and tempt fate.

This has become my constant fear, whenever I hear news of a major storm’s approach: What if we lose power? With extreme weather the new normal, it is now inevitable that strong winds plus precipitation on a large scale will cause massive power outages that can incapacitate for days and even weeks.

At its peak, Nemo knocked out power for 650,000 families and businesses in Long Island and up the New England coastline; that number was halved by Sunday. Still, losing power in a record-breaking winter storm means waiting in the cold for your turn on the utility company’s long punch list. This is what scares me.

Because of my Raynaud’s and poor circulation in my hands and feet, I simply can’t stay in a cold house for long. Well before the pipes might freeze, I will go numb. We have yet to invest in an emergency generator, but if the extreme weather patterns persist, this may become a necessity in a few years.

I hate thinking this way. I used to love snow as a kid. A storm like Nemo would’ve had me itching to run outside and build a snowman, or flop on my Flexible Flyer to slide down the hill in our back yard. I would’ve played outdoors until the snow turned blue at dusk and I lost all feeling in my fingers and my teeth chattered. The next day I would’ve raced out to snap icicles from the eaves and slurp them like popsicles.

As Nemo kicked into gear on Friday afternoon and I walked Ginger in the mere two inches that had accumulated so far, I watched children a few houses up the street slipping and sliding in the snow. It looked like fun.

I chose to live in New England because I love the full four seasons, including winter’s magical frosting of the landscape. I don’t want only to think of weather in terms of the risks involved. Storms are part of Nature’s cycle.

And yet. Now every significant storm has an ominous edge. There were plenty of online jokes about naming this one Nemo, moniker of the little orange-and-white clown fish of Disney’s animated pantheon. But Nemo was also the name of the vengeful, tormented submarine captain in Jules Verne’s 19th century science fiction novels, Twenty Thousand Leagues Under the Sea and The Mysterious Island.

In Verne’s world, Nemo raged against oppression and British imperialism, sinking war ships and rescuing castaways, living by his own law under the seas. The storms that now confront us are Nature’s payback for humans’ destroying carbon reserves and wasting the planet. What we’re experiencing is just a taste of even more severe weather to come, if we fail to act.

I want to believe that we humans are creative, adaptable and capable not only of coping with the severe consequences of global climate change that we’ve brought upon ourselves—but also able and eventually willing, collectively, to reverse the trend, at least for our grandchildren and future generations.

Home generators may be the immediate response to ensuring personal safety during extreme weather. But if we’re really serious about reversing global climate change, we need to take responsibility for much more than our own homesteads. And we need to start now.