Living in New England with scleroderma presents its challenges. Especially in the depth of winter, when temperatures have been hovering between teens and twenties of late.

Keeping our house warm gets expensive. We have a combination of steam radiators fueled by an oil burner and electric baseboard heat. Unlike many of our friends, who manage heat bills by setting their thermostats at a frugal 64 degrees and wearing lots of sweaters, I can’t function at that temperature. 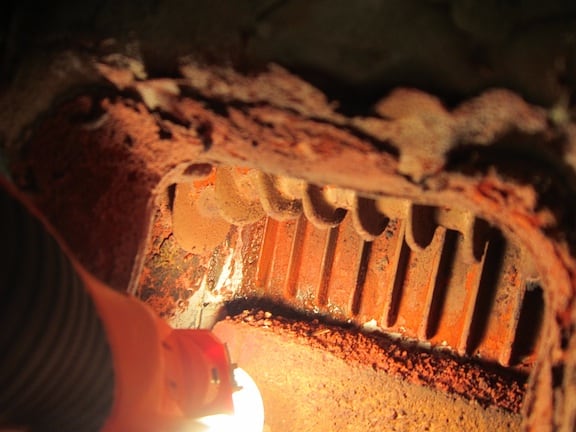 This has become even more of an issue since I began my home-based marketing consulting practice three years ago, after the college where I’d worked for 12 ½ years sank into serious financial difficulties and went through a series of layoffs, including my award-winning marketing department.

Since I’m now at home during the day, we can’t set the thermostat down, and our heating bills have been astronomical. So this summer, we decided to take advantage of a state energy loan program, insulate our attic and install highly efficient heat pumps. It’s taken months for all the loan paperwork to go through, and the heat pump contractors finally arrived last week.

But not before our 30-year-old boiler broke. Two Friday mornings ago, I was washing my face when the hot water pipes started clanging. The toilet groaned when flushed, and dirty water filled the bowl. Thinking maybe the city was doing some kind of repair work, I checked the DPW’s Facebook page (a sign of the times, the best way to find out details during storms, power outages and maintenance). But, no, the only post was a picture of city workers clearing storm drains of snow and ice.

With the kind of magical thinking that takes over when you suspect the worst and don’t want to believe it, I continued my morning routine. But as I washed my breakfast dishes, the pipes groaned again, shuddered and then, nothing. The hot water stopped running altogether.

Down to the basement I went to investigate. And here is why I’m glad, despite the roller-coaster ride of life as a freelancer, that I work at home. The boiler was spewing steam, and a copper tube that linked to the hot water tank had cracked and was gushing water all over the concrete floor.

I flipped off the boiler’s power switch, ran upstairs and called Al at work. What he could do from the hospital was unclear, but this was my reflex. As it turned out, his beeper was being covered by a fellow social worker, and I couldn’t get through.

So I ran back downstairs and tried to figure out how to shut off the water. The obvious lever wouldn’t budge. Neither would the shut-off knob farther up the pipe. My hands simply weren’t strong enough to turn either.

So I ran back upstairs, found the plumber’s number and made a panicky call. With help on the way, I grabbed a big pan, ran back downstairs, found two small tubs, and tried to catch some of the water. But, of course, I couldn’t lift the tubs once they were full—too heavy. Again, my hands just wouldn’t let me do what I wanted.

I was starting to freak out, feeling totally helpless to stop a major flood in the basement, when Ginger barked upstairs. The plumber had arrived.

As it turned out, he couldn’t flip the shut-off lever, either. It was frozen open. So it wasn’t my hands. But he could turn the knob, as well as the main water shut-off to the house (Note to Self: From now on, know how to do this!). With his help, we were able to sweep most of the water into the floor drain, and I soaked up the rest with newspaper. He repaired the broken tubing.

But. The boiler was still too hot to refill. I called the oil company, and over the course of the afternoon, we discovered that (a) the low water cut-off valve was so corroded, it had failed to shut off the boiler as the water drained out and (b) the cast iron tank had cracked as a result. Even with the new heating system about to be installed, we had to replace it to run our hot water and provide back-up to the heat pumps if the outdoor temperature drops below 10 degrees.

One week after having a house full of contractors working on the boiler, adjusting our radiators and hot water system, and installing the heat pumps, we are now almost ready to deal with New England winters. There’s a bit more work on the new system to complete. We’re still waiting to hear from our insurance company, but hopeful that most of the boiler expense is covered. We’ll be paying for the heat pumps for the next seven years (no interest), but even still, expect to spend less on the monthly loan payments than we have been spending to keep the house warm.

Soon, with the click of a remote control, I’ll have instant, steady heat in whatever room I’m in, using no more energy than it takes to power a 75 watt light bulb. Plus an energy-efficient boiler for ample hot water. Despite the boiler debacle, well worth the investment.