On Sunday, in 90 degree heat, I decided it was time to weed our backyard rock garden. I haven’t done any gardening in several years, mainly because the last time I tried, I messed up my hands. But I couldn’t stand it any more. 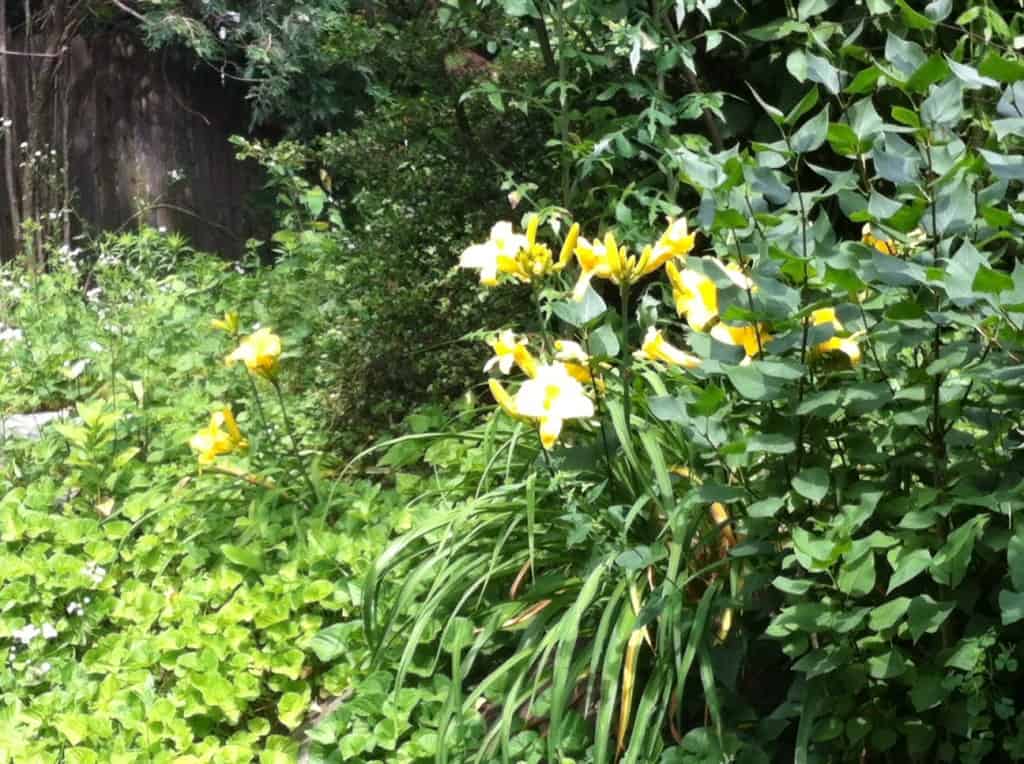 Our yellow day lilies, just bloomed, were half-hidden by an encroaching jungle. Between the extreme temperatures and forecasts of more heat, humidity and thunderstorms for the coming week, I figured if I didn’t do something, the weeds would thrive at the lilies’ expense and choke out any hint of beauty.

Besides, weeding seemed like the perfect antidote to all the words swirling in my mind—a writer’s liability. Perhaps the physical work would negate the narration and bring some insight.

I bandaged my finger ulcers with extra care to minimize irritation, lathered on sunscreen and insect repellant, donned an old straw hat, found my lavender gardening gloves in a basket in the kitchen (their special coating keeps out the dirt but allows skin to breathe, essential for my hands), located my angle weeder in the garage (a curved, sawed-edge tool with a prong at the tip), and headed into the backyard.

It was already steamy by 10:30. I tackled a few tall weeds—at least four feet high—first. I have no idea what they were, but they pulled out of the hot, dry earth easily. Ginger, my constant shadow, sniffed around the yard a bit, then wanted to go back inside after about a half-hour. I kept working.

Wild violets had carpeted much of the rock garden. They’re pretty in the spring, but very aggressive, leaving no room for much else. They’re also tenacious. I quickly discovered that I’d have better luck digging and leveraging out the roots with my angle weeder, rather that trying to pull with my hands—more effective, less strain.

As I dug and prodded and pulled, I wondered where the earthworms were. The ground was parched from the five-day heat wave, so maybe they were hiding farther beneath the surface. But their absence surprised me. When I was growing up, I used to love to spend a hot summer afternoon weeding in the shade of my parent’s front garden, watching the earthworms crawl amidst crumbles of dirt, their soft pink bodies squeezing and stretching as they aerated the soil. Wherever they appeared, the earth felt cool and smelled rich.

Mosquitos buzzed in my face, drawn by sweat. I swatted them away, smearing my cheeks with dirt, and kept on weeding. I discovered a forgotten sapling that I’d planted a year ago in the back of the garden. Somehow, it had survived all the snow and cold of winter. Still not much bigger than a twig, it had quite a few leaves. I cleared the ground around it for more sun. Nearby, I left what looked like a wild rose that had taken root, perhaps a mistake, since they’re invasive.

Weeds near the stone steps and larger rocks in the garden proved much harder to evict.  I tried prying them out with an old trowel, but the trowel bent under pressure. So I found a long handled tool in the garage with a curved fork at one end and managed to claw out some dense root clods. I sawed off a few woody weeds that were impossible to dislodge. 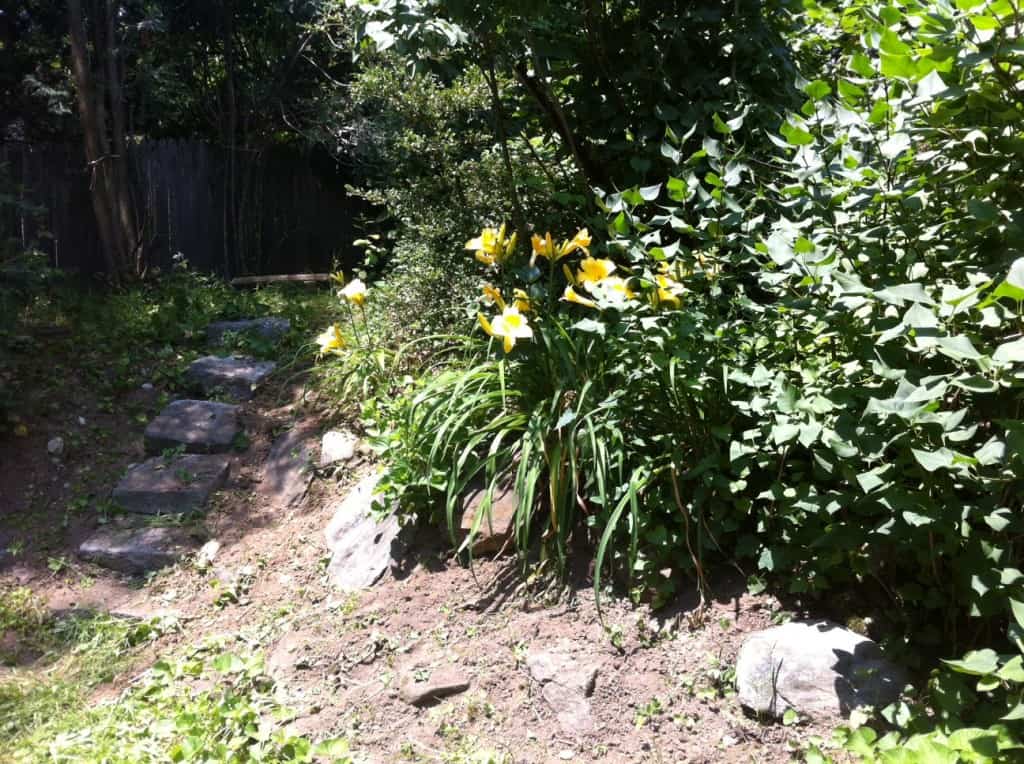 As I worked, I tried to shut off the constant flow of description in my head. All the obvious gardening metaphors played through my mind—clearing away the clutter, seeing what’s really in front of you, enabling new growth/life/ideas. But the only way to achieve that through weeding, to turn it into a meditation, is to focus and stop the word flow.

I never got there. I just kept working until I’d cleared as much as I could and my heart was pounding too loudly in my ears from all the heat. It occurred to me that the best thing about weeding is the immediate gratification of making room. I found a slug, glistening on a blade of grass. I observed how some roots are like fine hairs and others, like white and purple carrots. I imagined planting basil and wildflowers.

By 1:00, with sweat flinging off my hair, I declared my weeding done. My hands felt okay, but my back and legs, weary. Grateful to discover I could still dig in a garden, I stepped back to review my handiwork. Plenty of weeds left to be pulled, but the lilies’ sunny trumpets were now easily admired.

Back inside, Ginger at my feet, I sat down at the kitchen table and drank a tall glass of seltzer. Time for a cool shower. It had been a good morning, though no great, hoped-for insights about work or my writing or something else from all that weeding. Such things don’t come when chased. They prefer to tunnel beneath the surface and emerge when ready.