Surrounding Israel’s Dead Sea, spires of salt tower like sentinels, guarding barren hillsides. In bright, humid heat, they shimmer, casting craggy shadows on salt-infused sand. These ancient formations no doubt inspired the biblical story of Lot’s wife, who, fleeing from God’s destruction of Sodom and Gemorrah, made the fatal error of pausing to look back and was frozen into a pillar of salt. Indeed, a salt formation near the Dead Sea is named for her. 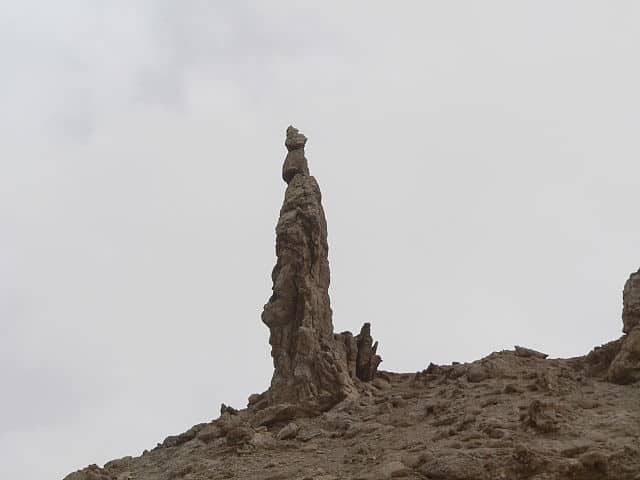 I once read somewhere that Lot’s wife’s plight was a metaphor for scleroderma. In its most virulent form, this deforming disease locks the body inside hardened skin, from which there is no escape. But scleroderma takes many forms, unique to each individual. And those of us who live with this disease in no way brought it upon ourselves. So the metaphor, while dramatic, breaks down for me.

Nonetheless, scleroderma has been known since ancient times. The Greek physician Hippocrates first described it as thickened skin, around 400 BCE. Carlo Curzio, an 18th century Italian physician and dermatologist, gave the first detailed description of the disease in 1753. His monograph, published in Naples, presented the case of a 17-year-old woman named Patrizia Galiera, suffering from hardened skin that varied in thickness, tightening around her mouth and neck. He noted that her skin lacked warmth, but that her pulse, respiration and digestion appeared normal.

Over the course of 11 months, her treatments consisted of warm milk, vapor baths, leeched blood and small doses of quicksilver. Miraculously, at least according to Curzio’s report, Patrizia’s skin softened and she fully recovered. (However, we will never know if she eventually experienced symptoms of mercury poisoning from the quicksilver.)

During the 19th century, physicians began to differentiate the variations within the broad disease category, including localized scleroderma and en coup de sabre (morphea), the latter so-named because it dents the forehead like a sword blow and then deforms the skin on only one side of the face. Scleroderma also found its way into fiction, afflicting a character in a Sherlock Holmes story by Sir Arthur Conan Doyle, “The Case of the Blanched Soldier.”

The connection between scleroderma and abnormal vasoconstriction was documented by the French physician Maurice Raynaud in 1863. He described the case of a farmer whose arms became numb in winter, and whose hands gradually hardened and darkened. Well-known to many of us who suffer from numb, tri-colored hands, this condition is named for him—Raynaud’s Syndrome or Disease, depending on whether it accompanies a disease like scleroderma or is free standing.

Six years after Raynaud’s discovery, the American Journal of Medicine published the first American report of scleroderma, with a history of three patients. More about the history of scleroderma can be found here.

Today, knowledge of the many variants of scleroderma is deeper and broader than at any other time in history. Research into all aspects of the disease progresses, although a cure has yet to be found. But the rarity of scleroderma—afflicting a median of only 15 individuals per million each year, worldwide—makes it all the more elusive.

Last week, a post I wrote two years ago about a recent breakthrough in scleroderma research found its way around the Internet. Several readers shared poignant stories about experiences with the disease and the loss of loved ones to the most deadly variant. All shared hopes that a cure will soon be found. I was struck, however, by another common thread: Scleroderma is so rare, and so varied in its presentation, that a number of patients suffered all the more because they were misdiagnosed at early stages of the disease. We do not all present as obvious scleroderma patients, with hardened, mask-like faces and clawed hands.

As important as finding a cure, it is essential that physicians in the field, especially those who live and work far from urban centers, with less access to current research, learn to recognize scleroderma and know about available treatments. I applaud the work of the Scleroderma Foundation, which has begun to offer online CME/CNE training for physicians and nurses, in tandem with the Postgraduate Institute for Medicine, to reach out in this regard.

Every step helps—whether in the lab or in medical school classrooms—to ease the path of those with scleroderma throughout the world. We are not pillars of salt. We are not responsible for our illness, helpless or hopeless. We need to support those who are working for a cure, and those who are educating physicians to recognize and properly treat scleroderma. June 29 is World Scleroderma Day. Make your mark.

You can find more information about current research and education efforts here: