It’s less than two weeks until Halloween, and my neighbors are ready. As I took my walk this weekend (no small feat, given that the temperature plummeted into the 40s and I really had to push myself out the door), it seemed as if holiday decorations had sprouted overnight. 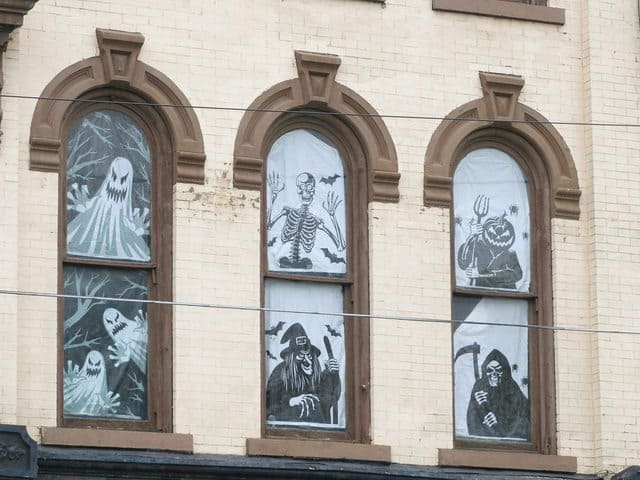 There were pumpkins, of course, and cornstalks and potted chrysanthemums in autumn hues, along with gauzy cobwebs wrapped around shrubs. But the big trend this year appears to be lawns planted with miniature tombstones. Forget the little orange lights. Mocking death is all the rage. One neighbor even had three human-size skeletons crawling up their house.

The ghoulishness is intentional, of course, and done in a playful spirit. Nonetheless, I find it ironic, to say the least. We as a society invest so much money and effort trying to avoid and hide the realities of illness, aging and death, that it’s startling to see homes decked out in ersatz graves. Perhaps it’s just one more form of denial. If you make death a joke, it can’t get you.

That impulse is as old as humankind. But as Halloween becomes more commercialized and deathly decorations become more ubiquitous, just another way to jumpstart the Christmas shopping season, the butt of the joke—our very mortal vulnerability—becomes trivialized.

We all live with numbered days, whether we want to admit it or not. Those of us who  live daily with chronic disease are significantly more aware of our mortality, often at a younger age, than those who have the good fortune of excellent health. It’s easy to make light of death when it still seems far off.

This is not to say that death is not fair game for humor and a sense of the absurd. Our ability to laugh at the things that frighten us the most is one of our greatest wells of resilience.

I simply don’t see the point of pretending there are dead bodies buried in your front lawn or some poor soul hanging from your maple tree. (I noticed the latter as we drove along a country road on Sunday, and for a split, horrified second, I thought the fake, stuffed body was real.) It not only fails to amuse me; I find it disquieting that someone would mount a skeleton on their house without thinking about what it really symbolizes.

Maybe I’m just getting crankier as I get older. Maybe it’s just getting too cold and too dark, too soon, as we head deeper into fall.

On the other hand, imagine what good could be accomplished if all that money spent on promoting and buying ridiculous Halloween decorations were invested into serious medical research to find cures for rare diseases like scleroderma. Now, that would be a reason to celebrate.