I’ve been making a lot of soup, lately. Despite a crazy 48-hours of 90-degree humidity last week, the nights are generally getting cooler, the maples are tinged with orange and I’ve started wearing my sweaters again. Fall officially arrives this Sunday, September 22, at 4:44 p.m. here on the East Coast. 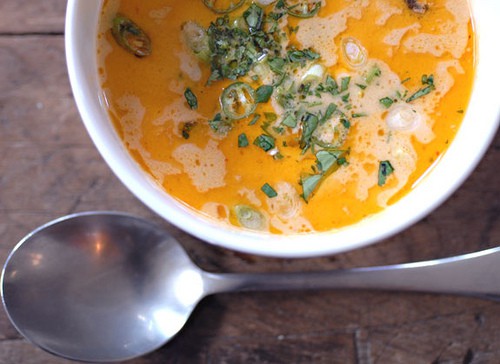 No better way to take the chill off my hands and the fall transition than a big, steaming pot of soup. Cooking for Rosh Hashanah last week, I tried two new recipes. For the first night, I made an Armenian variation of lentil soup that, along with the expected chopped tomatoes, onions and garlic, included apricots and a delicate combination of cumin, ground coriander and dried thyme. Very good.

The second night (I always experiment on my guests—fortunately, this works out 99.9 percent of the time), I tried a Hungarian wine soup with blueberries, pomegranates and strawberries (though you can use any combination of fresh or frozen fruit), orange and lemon juice, seasoned with cinnamon sticks and cloves. Even better. Both recipes can be found in the wonderful international Jewish vegetarian cookbook, Olive Trees and Honey by Gil Marks.

I like making soup almost as much as I like eating it. It’s a magical process. I’m always fascinated by how easy it is to create a nutritious meal with a pot, water (or sometimes store-bought stock from an organic market or Trader Joe’s, which I find saves time and money and is nearly as good as homemade), fresh vegetables and seasoning.

As one who grew up on Campbell’s, I used to believe that soup was far too complicated to make yourself. It had to come from a can. The broth had to be salty, neon yellow, with tiny cubes of chicken and slippery egg noodles.

Then I discovered how to make chicken soup, with chunks of meat and lots of onions and carrots and celery, maybe some noodles thrown in. A whole new world opened up. How could I have ever mistaken that red-and-white-labeled, ersatz mixture for the real Jewish penicillin?

I no longer eat meat, so I no longer make chicken soup, but I’ve become a big fan of all kinds of vegetable and fruit soups, from the easiest minestrone to an amazing gingered plum soup from my Moosewood collection.

You don’t even need a recipe. Like a good friend, soup is forgiving. You can experiment, throw together whatever vegetables and spices you happen to like, add a little of this and a little of that, adjust here and there, and create a culinary masterpiece. (Just be sure to make some notes if you want to replicate it next time.)

All it takes a little advanced planning. Most soups involve only about 20 minutes of prep work. Then you can just go about your business while the concoction simmers and fills your home with the most savory smells.

And there is something so comforting about sharing soup at the table—delectable, relaxing, the perfect conversation starter. Easy to swallow. Revivifying.

Soup is an invitation and a fulfillment. A promise kept. Liquid love.