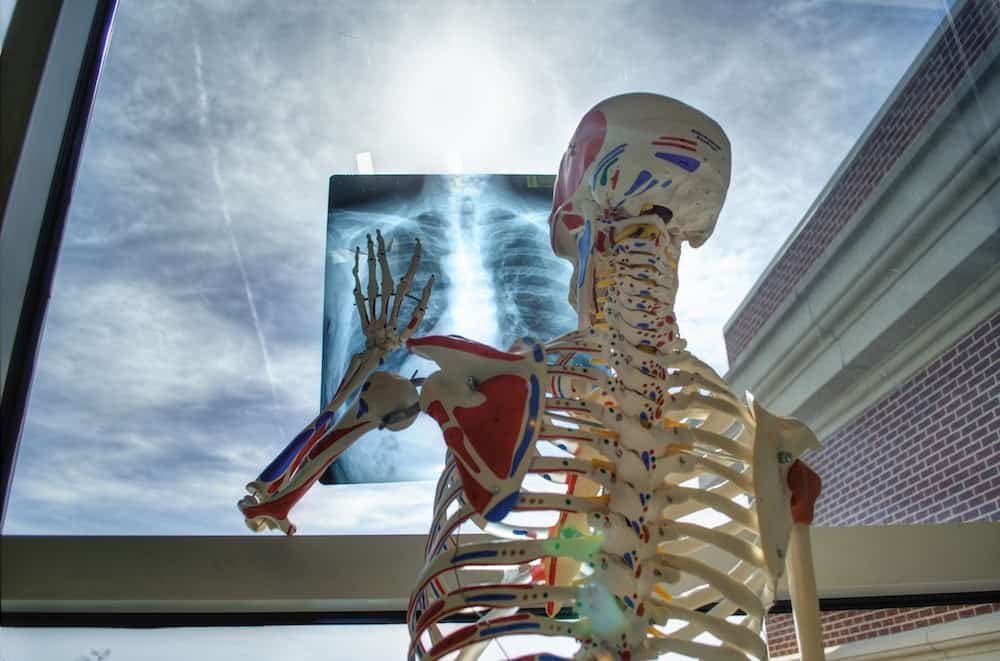 Friday afternoon, about 4:45. I was trying to wrap up a writing project when Al came home from work at the hospital (he’s a medical social worker). Usually he doesn’t get home on a Friday until 6:00, earliest. He said a brief hello, told me he was cold and needed to go to bed. This is not like him at all. He went upstairs and slept for an hour-and-a-half. When I checked on him, he was restless and very uncomfortable. I had to race out to buy a thermometer, because neither of us ever runs a fever when we get sick. His temp was 102.3°F. And he was starting to cough. Not good.

No way I was going to try to manage this by myself, especially with my hands in such bad shape. So I called our doctor and got the after-hours service. The nurse quickly assessed the situation and told us to come to Urgent Care. It’s been years, fortunately, since we’ve needed such a visit, and our medical group’s Urgent Care set-up has completely changed. We walked into a sleek new facility where you have to sign in on touchscreen computers, not unlike you find in a cell phone store. You plug in the last four digits of your phone, and that’s how you can see on the monitors where you are in the queue. We were number three.

Soon we were processed by the intake nurse, and then there was a short wait until we were shown into an exam room by a friendly male nurse and female medical assistant. Al’s vital signs taken (by this time his temp had dropped about a half degree, thanks to some ibuprofen), we waited maybe 10 minutes until the doctor came in. He was very thorough. The risk here was that Al does not have a spleen, which is part of the immune system. The first year we were married, he contracted mononucleosis and his spleen ruptured, requiring emergency surgery. He came home from the hospital the day before our anniversary—an auspicious conclusion to our first year.

After a slew of blood tests, a chest X-ray and urine sample, we waited around for early results—all negative. So the doctor sent us home with a prescription for an antibiotic as a precaution against any lung complications until all the tests were in.  Al was feeling better and his cough had subsided, so we hoped he just needed rest and time to recuperate.

We both settled in for the evening. Around 10 o’clock, the phone rang, but the caller ID said “United Bank,” so I ignored it. Why would a bank be calling on a Friday night?  I went about my business, did my hour-long routine with my hand care for all my ulcers, and took 200 mg of gabapentin for nerve pain. Then I took a look at the phone. There was a voicemail. By this time, it was about 11:30. The message was from Urgent Care, asking us to call the overnight service. It took me 45 minutes to get through to the clinician on call—Al’s white blood count had come back elevated, sign of a more serious infection, and they wanted us to go to the ER to have him checked out.

So, I woke him up, we both got dressed, and I drove him to his hospital. We arrived close to 1 AM. Now, the ER at Al’s hospital is neither new nor sleek. On a Friday night in July, about 20 other ambulatory patients were sitting around the waiting room in various stages of alertness, diddling with their cell phones. The intake nurse was stressed and busy with a young man on a stretcher who was apparently in and out of consciousness. An old episode of Law & Order (as in Sam Sheppard was the DA) was playing on the TV monitor. We settled in for a long wait.

I was tired, draggy from my meds, and scared. I did a little research on my phone to figure out what Al’s white blood count meant. I tried to find a comfortable position in an uncomfortable seat.  I covered my fingers with my hand warmers, because I was nervous about picking up some kind of infection from the hospital. Al kept himself busy reading a magazine that he’d had the presence of mind to bring along. He wasn’t feverish anymore, thanks to a dose of acetaminophen and one of his new antibiotics. I tried to doze, and I tried to watch a little TV, but the next program was even worse—some ridiculous show about vampire hunters. Really? In an ER? A show about vampires invading a blood bank?

Finally, around 2:40 AM, it was our turn to be seen. Al got to lie down on a gurney, and I scrunched into a chair. At least we had a semblance of a room where they kept the supplies, instead of getting stuck in the hallway. Then came the procession of nurses, physicians assistants, and eventually a doctor to check him out, all requiring repetition of his medical history. I was adamant that they get the test results from Urgent Care, rather than stick him again for the same blood work or do yet another chest X-ray.

This proved a bit more complicated than it should have, because the Urgent Care service is on a different electronic medical record system than the hospital. So we had to wait for a doctor who is affiliated with our medical group to be able to access the results. By the time all of this was accomplished, around 4 AM, Al had been able to get some more sleep, his temperature had come down, and the doctor who saw him thought there was no point in admitting him. He advised that Al stay on the antibiotic for 10 days to account for the infection, though its source was still unclear. We were to follow-up with Urgent Care to get more test results as they became available.

Back home we went, and straight to bed. I finally got a few hours sleep before my hands woke me up around 8:30. I was getting some breakfast when the phone rang. Caller ID: United Bank. This time, I knew enough to pick up (and tell them, later, about that strange misnomer). It was Urgent Care with another test result: Al’s Lyme Disease titre had come back positive. Fortunately, the antibiotic that the doctor had prescribed happens to cover this pernicious bacterial infection. Also fortunately, we caught the disease early. From what we were told, he has every good chance of a full recovery after a 14-day course of the antibiotic. And he’s learned a very important lesson about checking for ticks when he takes a hike in the woods.

Needless to say, it was a real relief to have a definitive answer for his sudden illness, as well as a straightforward cure. He continued to improve through the weekend, saw our internist for follow-up on Monday, and is back to work today.

Here’s hoping we have no more medical surprises anytime soon. And no more close encounters with blood-suckers, be they ticks or ridiculous TV vampires in the middle of the night.