Last week I found myself sitting inside a tall, phone-booth-shaped plexiglass box, staring out a window at blue sky over Main Street and the County Courthouse, my nose squeezed between padded clips, panting into a rubber mouthpiece connected to some rigid tubing connected to a plastic bag. 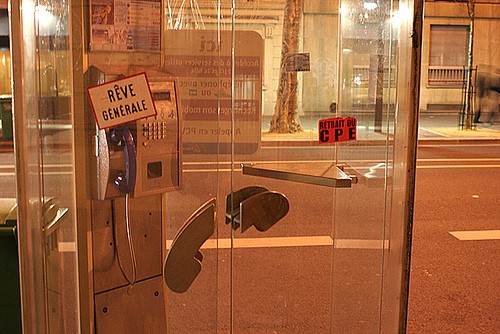 This routine is part of my biannual pulmonary function test, or PFT, a series of measurements to assess my lung capacity and efficiency. I’ve had to undergo this test numerous times over the course of about 25 years, to keep track of how my scleroderma is affecting my ability to breathe and absorb oxygen into my bloodstream. The same tech has been administering it since I began. His name is Alan.

We’ve both gotten grayer over the decades. Alan is an avid golfer who favors tie-tacks that look like golf clubs with a little pearl for the ball. Whenever I have my appointment, I always ask him about his golf game, and he always asks me if I’ve written another book like my environmental history of our city’s urban forest, which I published in 2001.

Then I take note of what’s new in his office. This time, it’s the location of the plexiglass box. Usually I don’t have to sit in the box until the end of the series of tests, and it’s in another room—without a view. But the equipment was updated since my last visit, and now the box is in Alan’s office. Which is a nice thing, because he happens to have a corner space on the third floor of the hospital with a great view of downtown.

And the view really helps me get through the tests, especially the last series when I essentially have to hyperventilate into this bag with the door of the box closed, to control the air quality within the box. Not for claustrophobes.

Alan has a very soothing voice. “Breathe normally, now,” he instructs me after I adjust the tight nasal clips and arrange my lips around the rubber mouthpiece so no air escapes as I breathe into the plastic bag. All of this equipment is attached to the internal wall of the box, with some other tubing leading outside the box to tanks that provide the correct mix of gases. The set-up is fixed, so you have to sit really straight as you breathe into this contraption. Truly an awkward position. Nothing normal about it. At least I know what to expect after all these years.

We begin the first series (door open). “Okay, now push, push, push, push until you can’t get out any more . . . . and b-i-i-i-ig breath in!” I force out the air from my lungs until they feel flattened and then inhale a big gasp, but it always seems like I can’t refill them all the way. Frustrating. Each time I do this test every other year, it gets a little harder. Two more times to repeat. I marvel at how Alan must say the same words thousands of times annually with different patients, but never seems bored or annoyed.

There are several more variations on this basic theme of normal breathing, big exhales and big inhales. Then there’s the closed-door test, when you have to pant into the bag with your fingers on your cheeks, and then something clicks inside the connection between the mouthpiece and the bag and you have to keep panting, but your exhalation is blocked, so it’s harder. Every test requires three repetitions.

Time to remove the damn nose clips and rest in-between series, as the equipment recalibrates. I remark how the County Courthouse is all finished now, as opposed to my last visit, or was it the one before, when it was still under construction? I remind Alan how my first visit was at the old hospital, in a room with no windows and a big green metal tank with the gauge on top in full view. Now the gas tanks are hidden behind a curtain.

He pulls up the results on his computer screen. Some are within the same range as two years ago, some a little worse. I try not to get discouraged. Better to wait until my rheumatologists can interpret it for me. Overall, considering how long I’ve had this disease, I’m still doing well. Need to keep exercising.

After about a half-hour, we’re all through. “See you in two years,” I say, as I walk out the door into the white hospital corridor. Deep breath. Glad to be out of that box, heading into a blue-sky day.