How is it that vacations always end too soon? Just 24 hours ago, we were arriving at the ferry dock in Portland, Maine, back from a week on a lovely, remote island in Casco Bay. The sky was periwinkle, the breeze stiff. As we’d sailed to the mainland, our captain pointed out a half-dozen porpoise riding the tide, hunting fish. I never was quick enough to glimpse them, but I heard one cackling as it dived over the waves.

For eight days, Al and I slept in, took walks every afternoon and went to the beach late, when the sun wasn’t searing hot. We read and I wrote and sketched. We sat for hours watching the terns fly high over the water, then nosedive into the waves, snag minnows and pop back into the air, gulping their silvery catch as they flapped into the headwind to reconnoiter. 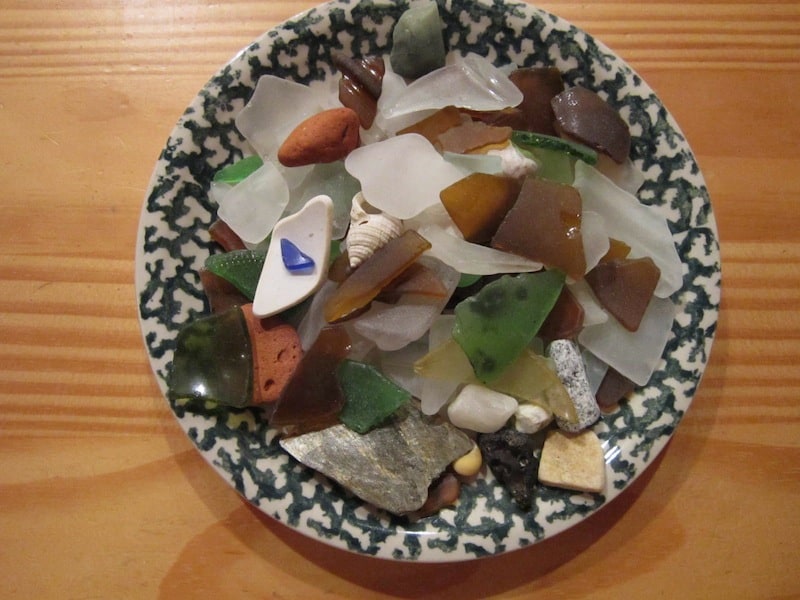 And we collected sea glass. Mounds of it. Mostly different shades of white with a tint of lemon or lime, a tinge of aqua, a hint of lilac; also beer bottle browns and greens.

I’ve been gathering sea glass since our now-grown daughters were little and we would scour the beach, holding hands, singing and skipping over surf. Finding even one piece would be cause for a little dance. Here, though, sea glass was bountiful. So the search was on for a sea gluncker’s treasure, cobalt blue.

From our first trip to the beach, the day we arrived, I was hunting for blue sea glass. A great meditation, especially since I was sick with a horrid cold when we left home, hacking and sneezing. And totally pissed off, because, of course, you’re not supposed to be sick on vacation, and I caught it from Al, who had come home sick the week before and missed several days of work, as a result. Plus, after my recent vitreous detachment in my right eye, my sight was full of floaters—so many that when I gazed out at sea, the sky looked like it was filled with space trash.

Grumble, grumble, cough, cough, grumble, grumble. I walked the beach, focused on each stone and shell in my path. Will my vision ever clear? What if I get a retinal detachment? How can I get to the mainland fast enough?  I picked up a white stone shaped like a tiny ice cube and rolled it between my fingers. Why didn’t he wash his hands more carefully? Why was I so stupid to use his computer and not wash my hands after? I don’t want to be sick all week! We wait a whole year for this trip, and now what?

My breathing was so compromised that by Monday morning I woke up and decided that if I was still that sick by Wednesday, I was going home. I told Al, insisting that he stay and I’d pick him up on Sunday. He said he’d come with me, but I really didn’t want to spoil his week. We talked about future vacation plans and how I’ve realized, as my health gets more complex, I need better access to medical facilities, just for peace of mind. He agreed.

With that reassurance, I redoubled my efforts to make the most of the trip, breathed in healing sea air and kept searching for blue sea glass. By Wednesday I was doing much better, well enough to suggest a long walk to see an exhibit of paintings by local artists at the island’s historical museum. We headed out along one of the two main roads, which had just been repaved the day before. And stepped on warm macadam. Which glommed onto the bottom of my good walking sandals.

Grumble, grumble, cough, grumble, grumble. These are my favorite summer shoes! They support my crazy feet! What if I’ve ruined them? I kvetched as I walked along the roadside, trying not to step on any more tar and, instead, packed grass and dirt into the guck. Al said we could stop at the ice cream shack. We found some sharp rocks, and he was able to carve off most of the crud from the soles. When we got back to our rented house, he removed the rest with a putty knife and a nail. Then we went to the beach, Al’s pick.

This beach was next to the island marina. Al wanted to park our chairs with a good view of the moored boats. I wanted to walk a bit farther, but I agreed to his plan. After all, he’d rescued my sandals. As I set down my beach chair, I noticed a speck of cobalt in the sand, inches from the chair’s aluminum footing. It was a chip of blue sea glass, no bigger than the nail on my pinky.

That was the only piece we found on the trip. We walked miles of beaches, clambered over countless boulders, waded and swam in the ocean and trekked across sandbars at low tide. My cold waned and I caught up on my sleep. I discovered that the floaters are less visible when I look at multicolored and darker surroundings, and when I take off my glasses. My finger ulcers improved in the warm sun. I got a great tan. Time slowed.

Now, back home, having kept a morning business meeting, plowed through hundreds of emails and sat at the computer all afternoon, I wish it didn’t seem so long ago, already, that we were walking the beach. Later, I’ll layer this year’s sea gluncking finds to top off a jar on my bureau. And be sure to place the chip of blue where I can see it.