It’s official. I have now entered the world of smart phones. iPhones, to be precise. And I’m having a blast. I can iMessage with Mindi working overseas and Emily in college out-of-state. I can keep up with my email when I’m away from my iMac. I can search the Internet in the palm of my hand. 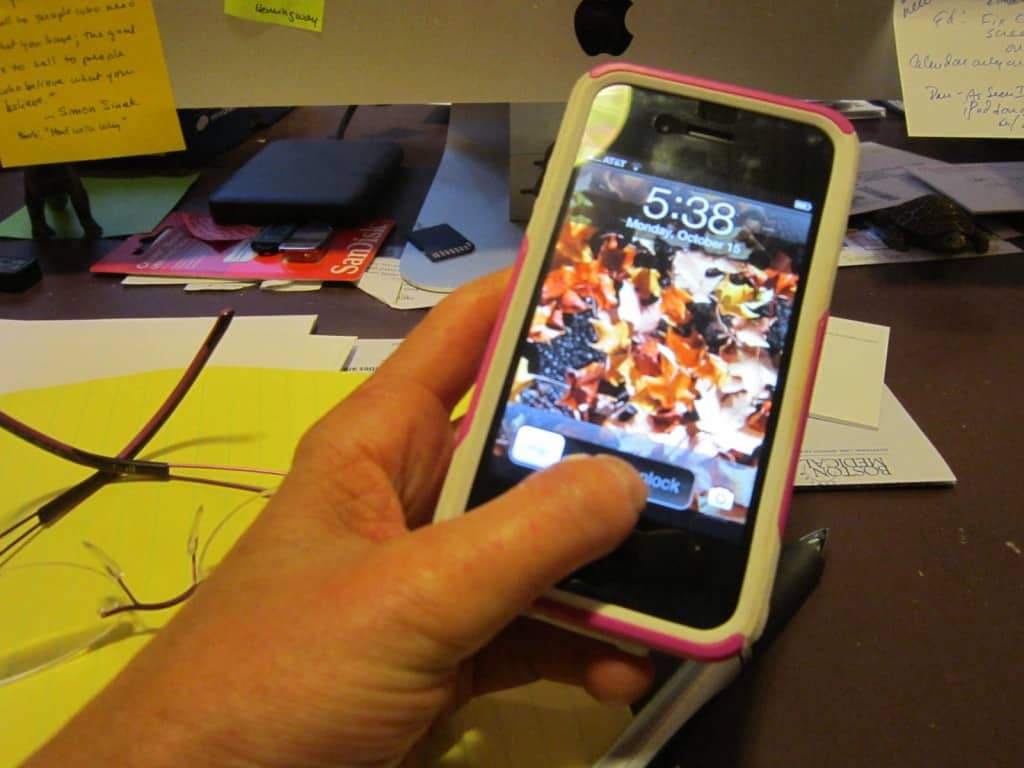 All the stuff that everyone else has been doing for a long time, already. I hadn’t made the switch until now because (a) smart phones are expensive and (b) data plans are expensive and, most importantly, (c) I didn’t think my hands could work the touchpad.

I’d jumped to this conclusion a while back, when I unsuccessfully tried typing on a friend’s iPad, just to experiment. I kept pressing on the glass screen like I would on a regular keyboard and nothing happened except my fingertips hurt, because the bones are resorbed and jagged and pressure on a hard surface smarts.

The idea of carrying around a stylus made no sense for a tablet or a smart phone, because it would be one more thing to lose. So I stuck with my old Samsung cell phone with its little QWERTY keyboard and figured I’d just be behind the times.

But necessity, as they say, is the mother of invention, or in this case, inspiration. After nearly a year of lousy phone communication with Mindi in Israel and too much hassle trying to find mutually workable times to Skype with a seven-hour time difference, we decided to take the plunge. I tested an iPhone and realized that the lighter you touch, the better it works. Totally counter-intuitive for me, but there you are.

We got Mindi an unlocked iPhone 4 for her birthday to take back with her to Tel Aviv. And a few weeks ago, when the iPhone 5 came out and Apple zeroed the price of its iPhone 4 with major wireless carriers, we made the switch. Free iPhones! Woo hoo!

Of course, it’s not all that simple. In fact, the transition from our old Verizon plan to our new AT&T plan (we switched carriers because their wireless configuration is the one used overseas, and we wanted to put Mindi’s phone on our plan whenever she returns to the States) has been a huge time suck.

Everything that could have gone wrong went wrong. I had to track down the iPhones at Best Buy because the local AT&T stores had none. Our phone numbers ported over from Verizon to AT&T with typos that took an hour-and-a-half to fix. The iPhones, I discovered the next day, had faulty mics and needed to be replaced. Emily’s phone was put on the wrong plan. All of these mistakes with phone numbers and plans were recorded in AT&T’s billing system as new phone lines with associated fees, and we just got an initial invoice that’s about twice what we owe. Altogether, I’ve spent about 10 hours on this project, and who knows how long it will take to straighten out the billing.

And yet, I’ve found some excellent sales reps to help with all the mishaps, and we’re on the way to getting the rest of the issues resolved. A friend helped me think through how to save on our traditional phone plan so that we may actually be able to bring our costs down to what we were spending before.

Best of all, I love using my new phone. The touchpad is actually easier to use than my old Samsung’s keyboard—less pressure, no moving parts to open and close. I can check the weather when I get up and know how many layers to wear without getting chilled as I go downstairs to read the forecast in the newspaper before the heat comes up. I can take a picture with just my thumb and send it in a snap.

And now I have the perfect activity for all those long waits in doctor’s offices—catching up on all the blogs I never have time to read at home.