I think it’s spring. At least, it’s supposed to be, according to the calendar. But we should fire the groundhog. 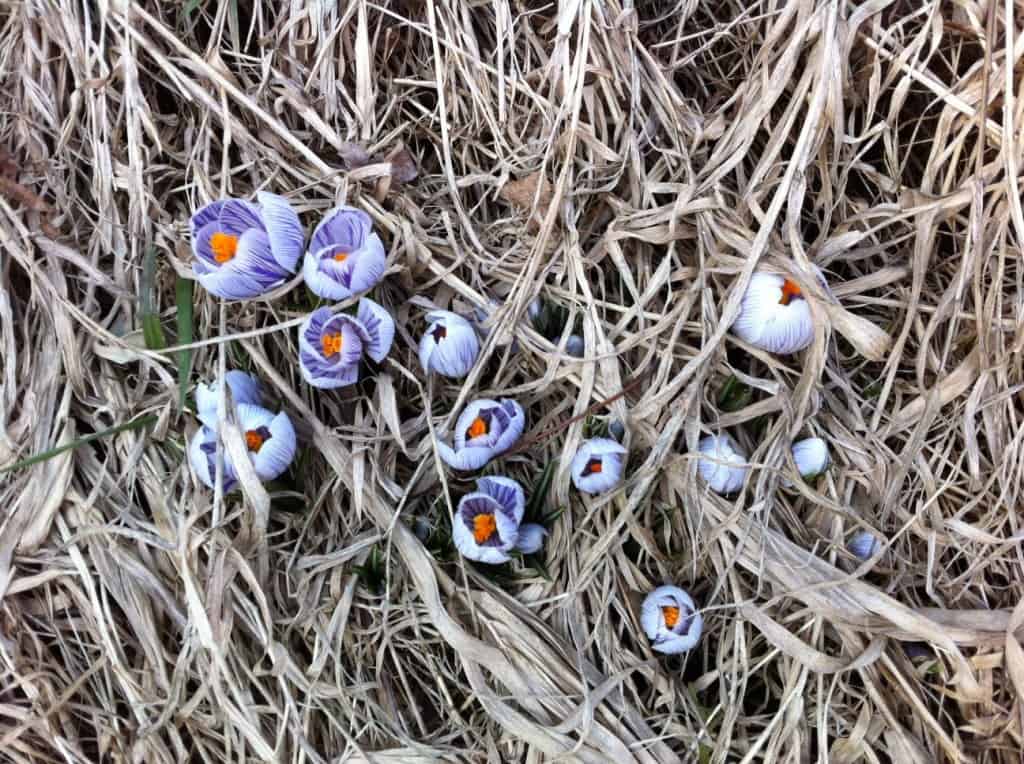 This has been one long, cold winter here in Massachusetts. Our lavender crocuses just sprouted last week, but they’re hiding from freezing night temperatures and sharp winds, petals clasped against the cold, praying for the warmth that’s supposed to come with longer daylight hours. When the sun’s rays trickle into their corner of our backyard garden for a few hours in the afternoon, they gape as if astonished, exposing fuzzy stamens the color of flame, welcoming bees.

I’m slowly exposing my hands, too. Spring in New England has always been my toughest season, a tease of warmth to come, but mostly chilly and damp with harsh, sharp breezes that stir the sandy dregs of road salt, stinging eyes of those unwary.

The cycling from cold to warm to cold again exacerbates my Raynaud’s with frequent episodes of icy lavender fingers and numbness, ulcers that sting as if singed, new sores appearing weekly. The sensation is captured precisely by poet Elizabeth Bishop’s description of frigid seawater in At the Fishhouses:

If you should dip your hand in,
your wrist would ache immediately,
your bones would begin to ache and your hand would burn
as if the water were a transmutation of fire
that feeds on stones and burns with a dark gray flame.

Last year at this time, I had nine ulcers and a bout of cellulitis that took several blasts of antibiotics to cure. But no significant ulcers this season, so far. This is quite extraordinary. I’ve been very vigilant since I discovered a few months ago that I could heal my ulcers and reduce the number of ever-present bandages by wearing white cotton gloves and paraffin hand cream at night—this, a serendipitous solution to the fact that my skin started shredding in reaction to bandage adhesive.

Today, I have only my right thumb in a bandage, mainly because a grain of calcium is slowly emerging through a cracked ulcer. That’s it. I’ve been out and about for the past four days with no bandages at all. Truly amazing. I tote my moisturizer and apply it strategically throughout the day, type at my computer using cotton gloves to protect my skin and generally try to pay attention to what I’m doing so as not to cause any collateral damage to my fingers.

Our new heat pumps have helped, too, maintaining a much more even temperature throughout the house than our old steam radiators ever could. I still feel the cold all too readily, but at least I can quickly adjust the heat for the room I’m in and sense warmth within minutes. This, I’m certain, has aided my hands’ miraculous recovery.

So, even as my fingers are in happy denial, I guess it’s fair to assume that spring is on its way, at last. The weather forecast predicts temperatures in the ‘60s and low ‘70s this week. Slender blades of grass tinge lawns green. Buds mist the maples that line our street with the barest hint of chartreuse and crimson. Children’s bikes and basketballs litter front yards. Long-limbed girls from the nearby Catholic high school’s track team run down the street in shorts and tees, gleaming ponytails abounce. As Al rakes away winter’s detritus, the turned earth smells pungent with promise. Time to switch out my snow tires and at least consider bringing my down coat to the cleaner’s. But maybe not ’til April’s end, just to be certain.