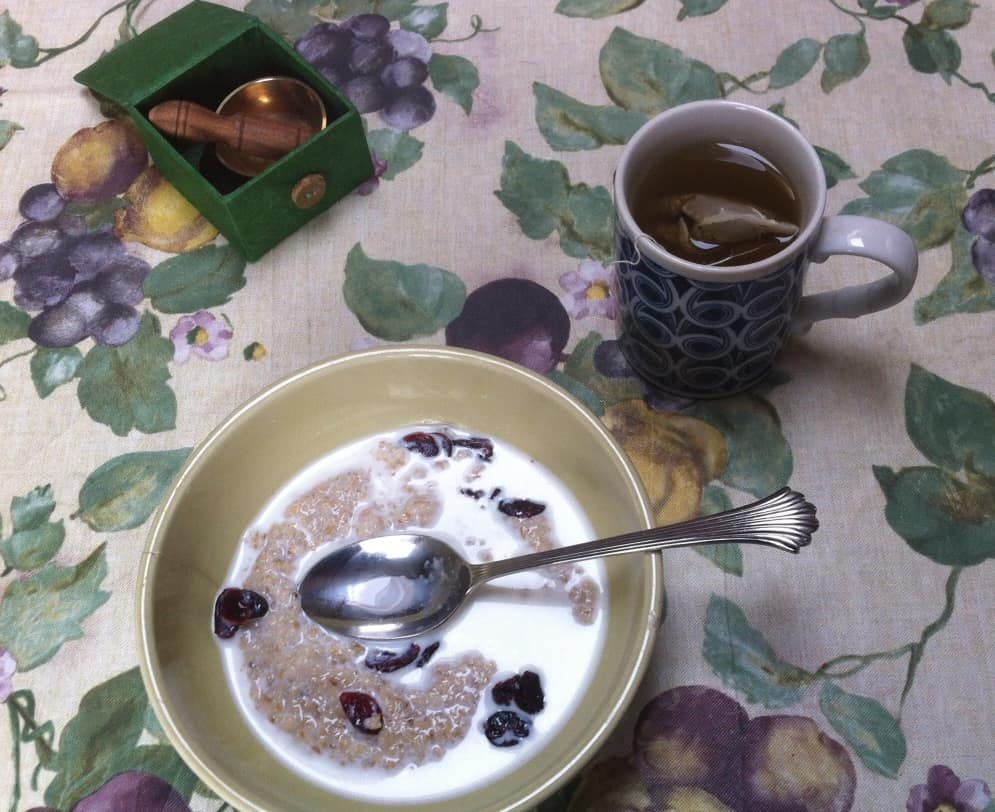 I tried an experiment this morning: Eat a bowl of oatmeal and craisins without doing anything else—no writing, no reading, no New York Times crossword puzzle, no checking email or Facebook or surfing the web on my iPhone, no planning the week’s menus or my work schedule. Just focus on my breakfast.

This proved a challenge. I only partially succeeded. (As soon as I realized I had the lead for this blog post, of course, I had to take a picture of my cereal bowl and tea and the little meditation bowl that a friend gave Al for the holidays). But for a few minutes, I was able to focus, and noticed several things:

I will try this breakfast meditation again, perhaps not every morning (hard to break the habits of an inveterate multi-tasker), but at least two mornings a week. It’s part of my ongoing effort to be more present in the moment.

My lack of presence was stunningly obvious one evening last week when I was driving home from Boston with a plan to stop at the supermarket. I turned onto the correct street, but then, instead of going to the store, ended up at the gas station right before the store. My tank was three-quarters full. I had no need for gas. But I didn’t realize my error until I started pumping.

I made it to the market afterward and picked up the correct groceries. But I was a bit shaken by how I’d been just too absorbed in too many concerns taking up too much space in my head to go directly there, in the first place. Maybe it’s aging. Maybe I need more sleep. Maybe it’s just one of those silly things that happens sometimes, when you go on automatic pilot without realizing it.

But it’s also the second time in a week that I’ve made a similar error, intending to do an errand at one store and landing at another, nearby, because I was thinking too much about other things and not paying attention to where I was going.

Conclusion: As 2014 arrives, my big goal for the year is to stay more in the present, less in my head, where anxieties—about health, family, finances, safety, what the future might hold—suck up more energy and effort than they are worth, especially since 95 percent of the stuff I conjure up never happens, anyway.

One of the pitfalls of being a storyteller. Better to pour it all into essays or fiction when I’m safely at my computer and not behind the wheel.

For you, dear reader, I hope you avoid your own wrong turns this coming year. May your 2014 bring you inner peace, good health and healing, fulfillment and prosperity, and breakfasts worth savoring