Hide Search
You are here: Home / Mind / Walking in Your Own Landscape 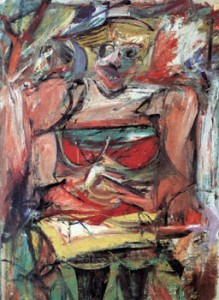 In contrast to his abstract expressionist works of earlier decades, with their layer-upon-layer-upon-layer of bold color swaths, de Kooning’s late paintings are spare and shimmering, his palette reduced to contoured ribbons and cul-de-sacs of red, blue and yellow looping through tinted white planes.

I was drawn to these paintings from the 1980s on my second visit to MoMA’s de Kooning retrospective this past Monday, the exhibit’s closing day. On my first visit in October, overwhelmed by the explosion of color, I wandered from painting to painting, trying to absorb the sheer energy and creative output of this complicated man who struggled with depression and horrific bouts of alcoholic binging through much of his seven-decade artistic career.

But this time, I focused on the late paintings. The body of de Kooning’s oeuvre is intricate, complex, each piece a world of ideas and inner struggle and striving for balance. What fascinates is how his late works lighten.

Known for agonizing over each piece, scraping down the canvas and painting again and again for months until he was satisfied with the results, de Kooning began to let go as his short-term memory and sense of future diminished.

“Around 1983,” write Mark Stevens and Annalyn Swan in de Kooning: An American Master, “having concluded he had little time left, de Kooning decided to forgo second-guessing and let each canvas stand or fall on its own merits. ‘There’s no end, really,’ he said of his early-eighties paintings. ‘I just stop it. Abandon it.’”

“Two years after de Kooning began his eighties paintings, it became clear that he must paint—not only to create salable work, but also to keep him mentally and physically alert. The few times that he stopped painting in the mid-eighties (when, for example, he once hurt his back), his mind deteriorated.”

As de Kooning’s dementia worsened, his assistants did more to help structure his compositions and focus the starting point for each canvas. Stevens and Swan note: “the paintings that emerged now were de Koonings with an asterisk.”

Still, de Kooning painted. His art was his life and his anchor as his mental function deteriorated. There is courage in his final works—to continue, despite huge cognitive and physical obstacles, to pour his inner world through his brush onto canvas. And there is a steadfast determination to continue following the ribbon of paint, wherever it leads.

“Then there is a time in life when you just take a walk,” de Kooning once told film maker Robert Snyder. “And you walk in your own landscape.”