Hide Search
You are here: Home / Body / Back Home 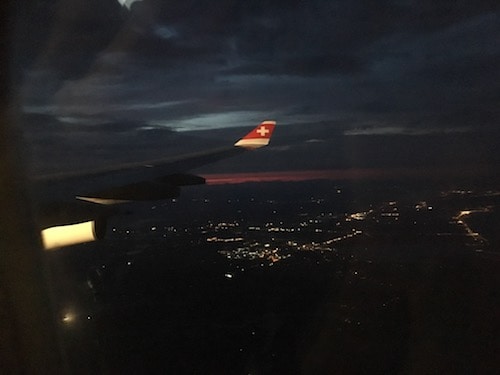 Home from our summer travels for about a week-and-a-half, but already it seems like a long time ago that we were away. That’s the strange thing about vacations. You’re completely immersed in your environs while you’re there, but once you’re back, it’s almost as if you never left.

Which is why I keep a travel journal, and we take plenty of pictures (especially my dear husband). If a tourist walks in a city and leaves without a record, was she really there?

Yes, I was, with Al—in Prague, Bratislava, Vienna and Berlin. Sixteen days, four countries, a crash course in European history, spectacular scenery, wonderful art. This trip was also personal: the bookends of our itinerary were designed to honor the memory of my great grandparents, who were murdered in Eastern Europe during the Holocaust.

My mother’s father, a professor of engineering at the Technische Universität Berlin, saw the writing on the wall in 1935 when he lost his position because he was Jewish. In 1936, after five months of searching for work in the U.S., he was able to find a good job and make a new home for my grandmother and mother. But, despite a heroic effort, he was unable to convince his elderly parents, who loved their homeland, that they should emigrate, as well, until it was far too late for them to escape the Nazis. They were transported to what is now called Terezín, a concentration camp about an hour’s drive from Prague, in August of 1942, and died there in early winter of 1943.

No one in my family has ever gone to Terezín. So, with a private tour guide, we visited the camp and learned details of my great grandparents’ final months. We lit candles in their memory. Later, at the end of our journey, we joined friends in Berlin for the placement of two Stolpersteine, or “stumbling stones,” which are memorial cobblestones placed in the sidewalk next to the home where victims of the Shoah last lived of their own free will. These were powerful experiences for me, which I am only beginning to process and understand. It is one thing to know the history of World War II in the abstract, and quite another to confront such horrors in the lives of your own family.

We enjoyed uplifting experiences, as well: fairytale scenery in Prague, a day trip to Slovakia’s High Tatras amidst the Carpathian Mountains; a visit to a medieval silver mining town, also in Slovakia, one of several UNESCO World Heritage sites that we saw during our travels; extraordinary artwork by two of my favorite painters, Egon Schiele and Paul Klee, in Vienna and Berlin. And, oh, yes, some very delicious food. My hands held up, my feet wore out, but I’m so grateful that we were able to honor my great grandparents’ memory and have another overseas adventure, whatever the challenges—physical and emotional.

Here are a few highlights: